Are you playing World of Warcraft? Did someone just tell you to “zug zug.” What does that mean? Are they even speaking English? “Zug zug” is a common phrase encountered by WOW players, and it has a simple meaning.

Here is everything you need to know about using the phrase zug zug. We’ll talk about its origin and meaning and how to use it in gameplay.

The phrase “zug zug” has several meanings. If you play World of Warcraft,” you have plenty of experience with people typing this phrase into chat. It’s also popular on forums like 4Chan. The meaning of “zug zug” in the context of WOW means the “work work” in orcish. Some players also suggest that the saying could mean, “yes yes” or “produce produce.”

It’s an affirmative phrase, said with a reluctance at the knowledge that they must undergo a necessary task for the betterment of the game and other members of the orc community. You’ll hear the game characters mention the phrase as they complete an action, like smashing a large stone.

The phrase also has an origin from TV. The movie “Caveman” would feature the phrase “zug zug” as a reference to sex in the film. A caveman would reference “zug zug” to his female partner in a request for sex from her. However, the more popular variant is the gaming version from WOW.

This game is getting kind boring all we do is zug zug all day.” 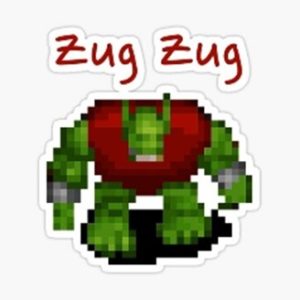 If you play online games, you’ll know that World of Warcraft is one of the biggest communities online. The game has millions of players from around the globe and a huge world where anything is possible for gamers. WOW launched an entire culture around the game, and there are several subcultures within the WOW universe.

Orc culture is one of the most peculiar sub-cultures of WOW. Orcs are large beasts with low levels of intelligence and huge strength and endurance. When WOW launched in 2004, it was a groundbreaking game, and players flocked to check out what was possible through the platform interface.

The orcs in the game have their own language, independent from other creatures and characters in the game. Zug zug means “yes yes” or “work work” in the orcish tongue. However, while WOW is the most recognized origin of the term, it isn’t the first.

Zug zug also appeared in the comedy film Caveman, in 1981, as a reference to sex. The film stared the acting talents of Dennis Quaid and Ringo Starr. Despite the phrase’s popularity, it would only appear in language on forums and char groups.

Phrases Opposite to Zug Zug

You would use “zug zug” more in gaming and streaming chat or forums than in real life. The meme is popular, but it’s common for people to type out the phrase. You wouldn’t use it when describing exciting moments or activities.

You can use the phrase “zug zug” in social and professional situations. The people around you would likely have a gaming background when using the saying in real-world scenarios. Online, you can use the term when you’re complaining about the monotony of mundane tasks in a game or when the conversation is going stale in chat.