Did someone just tell you, “so, you have chosen death?” Relax, they aren’t threatening your life. This post unpacks everything you need to know about the origin and meaning of this idiomatic phrase.

The “Lord of the Rings” franchise released its first film in 2001, claiming global box office success with the trilogy. The LOTR spawned thousands of memorable moments throughout the film, and many of them ended up on memes. From Frodo to Gollum, there are dozens of memes for each character.

Gandalf is one of the more mature characters in the series. The old white wizard, Gandalf, has several memorable lines throughout the movies. Who will ever forget the chill they got watching him say, “Thou shalt not pass!”

However, it’s been nearly 20 years since the movies, and the memes are starting to get a bit stale. However, one of the newer ones to appear on chats and forums in recent years is the “so, you have chosen death” meme.

The meme features a screenshot of the moment when Gandalf says the line in the film, with a foreboding look in his eyes. In the movie, Saruman warns Gandalf against his thought of turning against the fellowship.

Gandalf then delivers the line, “so, you have chosen death,” leaping onto a giant eagle and flying away from the engagement. This dramatic scene is a common reference in online discussions where people are trying to impress the weight of decisions on others in a lighthearted manner, with a stern tone.

So You Have Chosen Death Example Usage

Jorge: “I decided not to bother with that filing; you can do it this weekend instead.”

Amanda: “So, you have chosen death.”

Jorge: “Okay, I’ll take it home with me over the weekend.”

Father: “Clean your room while we’re out today, okay?”

Father: “So, you have chosen death. Clean it, or you’re grounded, young man.” 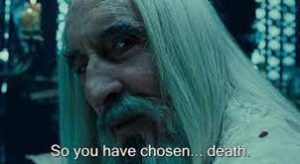 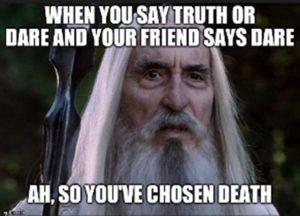 So You Have Chosen Death Origin

So, you have chosen death first appeared in culture in a 2014 motivational-style poster from Blogspot. The user famousquotesbest posted the image. It appeared again three years later with use as a reactionary image, placing the use of the phrase not only in its traditional place in the movie but with Gandalf in various serious-looking poses.

In May 2017, Redditor KekistanInfantry posted the image with the caption, “So France, you have chosen death.” The post was a reaction to the upcoming soccer World Cup finals match between England and France.

The mem would gain steam in 2018, appearing in several 4Chan and Reddit threads where users were remarking on another poster’s behavior.

Phrases Similar to So You have Chosen Death

Phrases Opposite to So You have Chosen Death

Ways People May Say So You have Chosen Death Incorrectly

Some people may use “so you have chosen death” in the literal context of the phrase. This expression does not constitute a threat to someone’s life. It’s a light-hearted and comical idiomatic saying with an underlying tone of seriousness.

Acceptable Ways to Phrase So You have Chosen Death

You can use “so you have chosen death” in many social and professional situations. For example, a parent could say it t their kid if they refuse to clean their room. A colleague could say it to their coworker if they refuse to swap a shift, or a streamer could type it in chat when telling another gamer that they have a vendetta against them.