Are you browsing through memes online? Take a look at the soyface meme if you want to have a good laugh. The soyface mem is a staple across many forums, chats, and gaming sites.

This post unpacks everything you need to know about the meaning and origin of this idiom.

“Soyface” is a relatively new term, being around for just over a decade online. The word’s meaning refers to the expression made by men that have a characteristic lack of testosterone in their looks and attitude. A Soyboi (soyboy) is a “beta-male” that complies with whatever other people tell him. He may also start to complain and whine over small issues.

The soyface appears when these beta-males get excited and want to show their enthusiasm. It can also refer to a complaining face where the soyboy voices their concerns in a decidedly female manner.

Soy is a common protein replacement used by men that want to avoid eating meat. However, soy also contains estrogens that lead to the suppression of the male sex hormone testosterone. As a result, the males in the memes typically have thin, stringy beards, wear glasses, and lean faces. 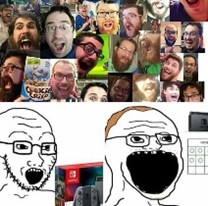 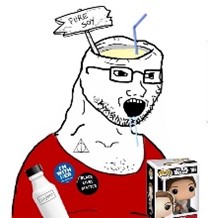 “Look at Ross, he’s a champion trader, but he has that soyface look to him.”

“This beta was arguing with the checkout girl about the price increase in soymilk. He made such a soyface when she told her that there was nothing she could do.”

“Look at that guy over there; he has a total soyface.”

“Soyface is such a stereotype, and there have to be thousands of them in modern society.”

“That guy has such a soyface; he’s like a living meme.”

The idiom “soyface” first appeared in the online chat forum 4Chan back in 2010. Users would refer to the term when describing the open-mouth look of a “soyboy.” The soyboy has many characteristics forming the stereotype. Typically, they wear glasses, have a “man-bun top knot,” and a beard.

The soyboy meme rose to popularity on sites like 4Chan to describe a “beta male” or a man with no masculine features. These individuals would feature in memes of them complaining about soymilk being out of stock or struggling to open a “Soylent” beverage bottle.

Since soy contains “phytoestrogens” that lower testosterone, the male hormone, “soyboys” were ridiculed by alpha personality types. The soyface is also associated with “Nu-Males,” or men in their 20s and 30s supporting a “woke” lifestyle devoid of masculinity.

In 2017, the Reddit user sexy_mofo1 uploaded the meme with the caption “Nu-male Mouth: Why is that everyone that seems to be against us smiles like this in photos?” The Nu-Male in the meme featured the soyface look, leading to the creation of the “Wojak” meme.

Some people may use the phrase to describe women. Typically, the meme only suits use with male soyboys. Soyface refers to a specific look in a man or boy, which can also express their personality. You would usually use the phrase when describing the person to someone else, but you wouldn’t say it to their face unless you were trying to offend them.

You can use the idiom soyface when describing the looks or attitude of someone that appears to fit the profile of a soyboy. Typically, you’ll be using the phrase when discussing the soyboy with other people and not directly to their faces. The expression suits use when you’re trying to show someone that another person fits the stereotype of the soyboy.