Did someone beat around the bush with something you need to know? If so, you could ask them to get down to “brass tacks “and give you the story right now. This post unpacks the meaning and origin of this expression.

The saying “brass tacks” means to stop beating around the bush and get down to business. If someone is not giving you a straight answer, or they are leading you in a different direction than you want to go in the conversation, you could use the phrase, “let’s get down to brass tacks.”

“All right, gentlemen, let’s get down to brass tacks and sort this out. I have a lunch appointment in 30-minutes, and I’m giving you 20.”

“Let’s get down to brass tacks with the price. It will cost me at least $10,000 to renovate, and that’s not priced into the market value for this place. I need a discount on the asking price.”

“Look, stop beating around the bush and get to brass tacks. Let’s not waste anymore of anyone’s time here, please.”

“When are these people going to get to brass tacks and stop with all the pleasantries?”

“I heard Japanese and Swiss people don’t like to talk business for the first 15-minutes or so during the beginning of the meeting. I wish they would get down to brass tacks when we sit down; the rapport building is gut-wrenching.” 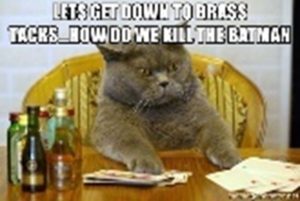 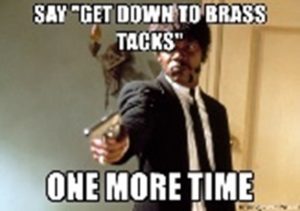 “brass tacks” originates from the extended version, “get down to brass tacks.” The phrase first appeared in print in 1863 in the Texas newspaper “The Tri-Weekly Telegraph.” The article in the paper expressed the saying as follows.

“When you come down to ‘brass tacks’ – if we may be allowed the expression – everybody is governed by selfishness.”

Most of the early use of the phrase in writing comes from the state of Texas, and language experts believe the state coined the term back in the 1860s.

Some people also believe it originates from the haberdashery trade. To be accurate when cutting material, shopkeepers would measure it between brass tacks set into the shop counter. Ernest Ingersoll’s “The Metropolis of the Rocky Mountains,” published in 1880, reads as follows.

“I hurried over to Seabright’s. There was a little square counter, heaped with calicoes and other gear, except a small space clear for measuring, with the yards tacked off with brass tacks.”

Phrases Opposite to Brass Tacks

It’s a somewhat cliché statement, and many people use it as a way to start a meeting or for other times where they want to impress a statement on someone or a group. Therefore, many people don’t like to hear these types of clichés and platitudes, as it’s somewhat annoying and condescending to listeners around you.

You can use “brass tacks” when you’re trying to tell people that you want to get to the root of the matter at hand. It’s a way of telling people to drop their guard so you can settle something.

You can use it in social and professional settings when you’re trying to tell someone that you don’t have the time to “beat around the bush” or for pleasantries, and you want to get down to business. It’s also common in negotiations where you’re telling the other person to move past the details and get to the point.