Are you looking for a friendly way to call your boss, the most important person in the business? If so, you could use the expression “big cheese.” This post unpacks the meaning and origin of this expression.

“What time do you think the big cheese is going to arrive? We better have the office straightened out by then, or we’re all in for a warning.”

“Look at Michael over there acting like a big cheese, someone needs to cut him down to size, and I think it’s going to have to be me.”

“So, you think you’re a real big cheese, hey? Well, let’s see how you handle things when I’m not around anymore.”

“Kyle is a big cheese; according to everyone else in the chat, let’s try and get on his team to get the best chance of winning the tournament.” 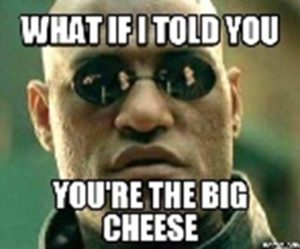 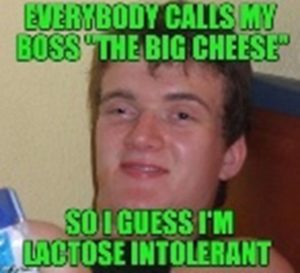 The expression “big cheese” originates from the early 20th century. At the time, farmers would host cheese shows to display their biggest and most impressive cheese wheels to the public.

An advert in the “Decatur Daily Review,” from November 1903, reads as follows in the caption, “Don’t Forget To Come And See The Big Cheese.”

The first written reference to using the “big cheese” to describe a wealthy or famous person comes from the book, “Unprofessional Servant,” written by William Sydney Porter in 1910. It reads as follows.

“Del had crawled from some Tenth Avenue basement like a lean rat and had bitten his way into the Big Cheese… He had danced his way into fame in sixteen minutes.”

Another rendition of the phrase referring to wealth and fame comes from “The Olean Evening Times,” in June 1922, in a column titled, “In honour of the Mayor of Olean,” where it reads as follows.

“The big mayor of Olean fair, You’re the big cheese on the scene.”

Phrases Opposite to Big Cheese

The phrase has nothing to do with the size of cheese or anything to do with cheese. The term is another way of saying “the big kahuna,” or another empowering phrase that makes the other person feel valued.

Using it to describe someone’s involvement with dairy products would be incorrect. However, you could call the owner of a cheese processing company a “big cheese” in reference to his position at the company and among his peers in business.