Did someone ask you to do something mentally challenging? If so, you could reply telling them that it’s “big brain time.” This post unpacks the meaning and origin of this expression.

The meme “its big brain time” means that it’s time to divert all your focus and energy into a task. The task needs to be something mentally challenging, such as learning calculus. Or it could be something where you are out of your comfort zone, and you need to concentrate on the task to complete it.

This meme is a great template to use for calling someone out with a huge ego or pointing out a situation that requires a lot more thought. It could also be used in a positive light to reflect pure genius. The phrase can also have a sarcastic reference for doing something easy.

Typically, people use the phrase online in chats, messages, and forums where they are trying to emphasize they are doing something challenging.

“Ok, I’m about to take on this calculus homework; it’s big brain time.”

“C’mon, people, we need to find an answer to this problem. It’s big brain time. Everyone put on your thinking hats.”

“It’s big brain time. Usually, I struggle with this type of thing, but I think I’m getting better.”

“It’s time to plan the best course of attack. It’s big brain time, everyone; what strategy are we going with to secure the win?”

“There’s no way around it. It’s big brain time, or we’re going to fail.” 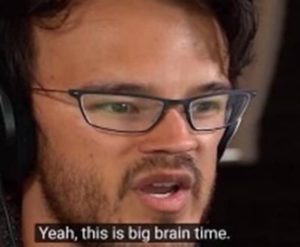 The origin of the expression “big brain time” comes from a video by YouTuber Markiplier. He coined the term when posting the video titled “Baldi’s Basics 1 Year Birthday Bash.” The image derives from a scene in the video where Markiplier boasts about his amazing intelligence and smart decisions as he hides away from Baldi in a classroom. The FX makes it appear like he has a large brain in the scene, launching the meme.

The popularity of the video spawned the creation of the meme, where Markiplier has a photoshopped head making him look like he has a large brain. The caption of the mem would always read an iteration of “Yeah, This Is Big Brain Time.” The memes can range in meaning, from acknowledging a creative or genius idea to sarcasm for posting something idiotic.

The first memes of “This Is Big Brain Time” were a hit with Redditors, receiving 10,000 upvotes in three months. The use of the meme really took off in May 2019, after the ManyFnafb’s subreddit post.

Phrases Opposite to Big Brain Time

You won’t use the expression “big brain time” when referring to serious, mentally-challenging actions or efforts. Typically, the phrase is a sarcastic expression that the other person is doing something that isn’t as challenging as they make it out to be.

You can use the expression “big brain time” in physical and online chats. However, the more common use of the expression is online, where it’s a popular meme showing the YouTuber, Markiplier. When you want to spam the chat, you’ll use it after someone says the phrase or tries to say something intelligent. The saying can also apply to occasions where another person says something that they think requires brainpower but is a mediocre task.