Is a friend making a bit deal about something you did? If so, you could ask them, “but did you die?” This post unpacks the meaning and origin of this expression.

The meaning of the expression, “but did you die?” refers to your surprise at living through an ordeal. For instance, if you get in a car with a friend and they drive like a maniac, you might find yourself criticizing your friend’s driving skills to others in front of others.

If this upsets your friend, they could say to you, “but did you die?” to show you that you are making a big deal out of something they consider to be nothing. The phrase is also suitable for any situation where someone is telling you something important to them but has little relevance to you.

Essentially, you’re telling the other person that you don’t value their experience, and they are making too much out of the situation.

You: “That was insane, Chow, we just came off the road doing 200-mph, and you almost killed us!”

You: “You’re a crazy person, Chow; you almost killed us when you didn’t tell us there was fentanyl in those drinks.”

You: “I can’t believe I had to go across town to find that video game for the kids.”

You: “That was a brutal workout.” 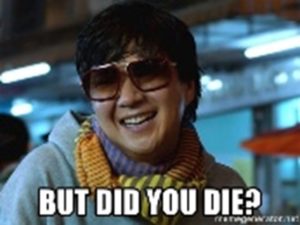 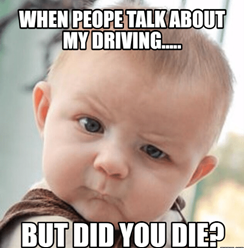 The origin of the saying, “but did you die?” comes from the hit comedy movie, “The Hangover Part II” (2013). The character of “Chow” is a crazy Chinese investor that hangs out with the crew. When the gang discusses the events of the previous nights and their unbelievable behavior, Chow responds with, “but did you die?”

The use of the phrase caught on in popular culture, and it became a popular meme on Twitter and other platforms like 4Chan, Reddit, and many other GIFs. The Urban Dictionary recognized the term in 2014. There are several renditions of this mem, and most of them feature Chow in his character from The Hangover II.

Phrases Similar to But Did You Die?

Phrases Opposite to But Did You Die?

Ways People May Say But Did You Die? Incorrectly

Using the phrase “but did you die” to describe events where the person might have actually died is somewhat distasteful, and using it in this context would show the other person that you don’t value their life. So, in most cases, it’s more appropriate to use it to describe people making a big deal out of nothing rather than a life-threatening event.

Acceptable Ways to Phrase But Did You Die?

You can use the phrase “But did you die?” in social situations when you’re trying to make other people laugh. Typically, it’s a reactionary statement to someone telling you a story where they felt scared. They could sense fear at your actions or any other experience they have in life. When they finish their story, you can reply with, “but did you die?”

This response shows the lighthearted side of what the person was saying. It could refer to them not needing to make a big deal out of something others find less enthralling. Or it could be a reactionary statement to a life-threatening situation where you’re telling the person you don’t care what they thought.