Are you looking for a way to describe someone that appears friendly and nice but you suspect could have devious intentions? If so, you could describe them as a “wolf in sheep’s clothing.” This post unpacks everything you need to know about the meaning and origin of this expression.

You could call them this due to their behavior of stringing you along and going behind your back to secure what is best for themselves instead of thinking about you.

“That new guy is friendly with everyone, but Kim heard him on the phone telling other people how he despises hanging around with us. Be careful; he’s up to something. I think he’s a wolf in sheep’s clothing.”

“Man, that last crypto coin investment was a real wolf in sheep’s clothing. I lost everything when they pulled the rug on the liquidity pool.”

“That job is a wolf in sheep’s clothing. It seems easy, but it will rob your soul after three nights on the graveyard shift.”

“The president is a wolf in sheep’s clothing. He promises us everything and then only delivers on promises to the rich.” 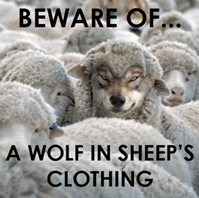 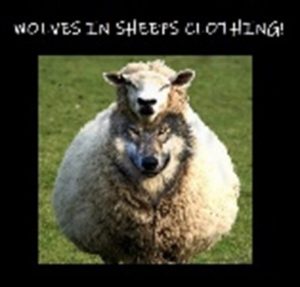 The phrase “wolf in sheep’s clothing” is a representation of the fact that it’s wise to remain wary of people that are overly friendly to you with no reason to do so. The Bible and Aesop’s Fables are two examples of popular texts that use the phrase.

The George Fyler Townsend translation of Aesop’s Fables in 1867 shows the expression as the following.

“Once upon a time, a Wolf resolved to disguise his appearance to secure food more easily. Encased in the skin of a sheep, he pastured with the flock deceiving the shepherd by his costume.”

The Bible also notes a similar expression in its parables. The King James Version, published in 1611, gives the warning in Matthew 7:15 that reads as follows.

“Beware of false prophets, which come to you in sheep’s clothing, but inwardly they are ravening wolves.”

Phrases Opposite to Wolf in Sheep’s Clothing

The phrase has nothing to do with sheep or wolves or clothing. It’s a way of saying that someone has hidden negative intentions against you, but they maintain a nonchalant, casual appearance when around you and other people.

For instance, you could have a friend that’s hitting on your boyfriend behind your back while trying to be kind to you on the phone and in public. In this case, they would be a wolf in sheep’s clothing.

The expression suits nay occasion where someone has a hidden agenda against you or is not as they seem at face value. It’s a good way to describe sociopathic behavior where the person may attempt to manipulate you into harm’s way so that they can achieve their goals.