Is someone talking to you about something you find embarrassing or disturbing in a public place? If so, you could tell them, “sir, this is a Wendy’s.” This post unpacks the meaning and origin of this expression.

If someone says “sir, this is a Wendy’s” to you, it means that whatever you were just talking about is wildly inappropriate for the place and time.

For instance, if you’re talking about someone’s private life in the open where other people can hear you, someone might turn to you and say, “Sir, this is a Wendy’s.” Typically, friends will use it when telling someone to change the topic of conversation or stop talking about something they find offensive.

It’s another way of telling someone that what they are saying is outrageous, and they should keep it to themselves. Typically, you would be saying it in a public place, but the phrase suits use in private conversations at home as well.

Chat 1: “…and that how we’re going to stop climate change and save the gorillas.”

Chat 1: “This hurricane is intense. It reminds me of Sandy, blowing everything in sight.”

Chat 1: “So, what do you all think about my idea? I think that if we all get together and chip in, we can make this happen in a few months.”

Chat 1: “And then I told her that I was with Chrissy last weekend, and we should go hang out for coffee sometime.” 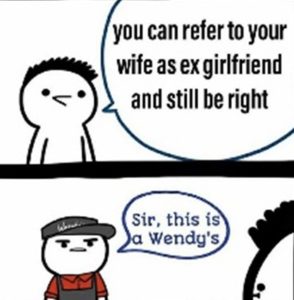 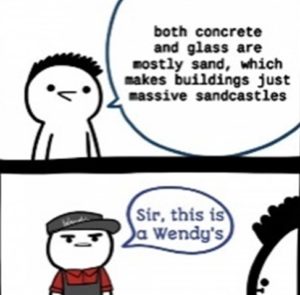 Sir, this is a Wendy’s Idiom Origin

The origin of the expression, “sir, this is a Wendy’s,” dates back to 2008 and the airing of the popular TV show, “The Office.” In episode 14 of season 4 of The Office, Michael calls Wendy’s looking for a date. He confuses it with an escort service, and the employee on the wind of the line tells him, “dude, this is a Wendy’s.”

Phrases Similar to Sir, this is a Wendy’s

Phrases Opposite to Sir this is a Wendy’s

Ways People May Say Sir this is a Wendy’s Incorrectly

Using the phrase to describe the restaurant, Wendy’s, is the incorrect use of the term. The phrase has nothing to do with restaurants or fast food. It’s a way of telling someone to change the subject because what they are saying is inappropriate or embarrassing to say in public. You would use the phrase more when a person finishes making a statement than interrupting them mid-sentence.

Acceptable Ways to Phrase Sir, this is a Wendy’s

You can use “sir, this is a Wendy’s” when you’re trying to tell someone that what they are saying is an inappropriate conversation for the time and place. So, if you’re out with friends and one of them starts airing other people or their “dirty laundry,” you could tell them this isn’t the time or place for that by using, “sir, this is a Wendy’s.” They’ll get the message and change the subject.