Are you typing away in the chat, and someone posts “Pepega” or the Pepega meme right after you? What does that mean? This post unpacks this idiomatic meme’s meaning, origin, and use.

The meaning of the emote, “Pepega,” is a visual representation of “idiot” or “moron.” You’ll find people using it in the chat on Twitch and in other message boards and chats where they want to express that the OP is making an idiotic statement.

The emote also suits use when you want to point out that the OP is making an inconsiderate statement without thinking about what they post. Typically, after one person posts the “Pepega” emote in reference to a post, other users in the chat will start spamming the emote to show their approval.

The emote also suits situations where you’re trying to show the OP that their plans didn’t go as they expected, and you’re making a mockery of their efforts.

The purpose would be to ridicule you at being taken out before everyone else when you had such high expectations of domination.

Another example would be ironically mocking someone after they make a stupid statement. So, if the OP says something like “Forsen doesn’t know what he’s talking about,” someone might reply with, “and you do, Pepega?”

Streamer 1: “Man, I didn’t see that happening; that guy came out of nowhere and fragged me properly.” 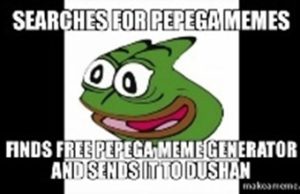 The Pepega meme has a disputed origin, but most meme experts state that it first appeared on the streaming platform “Twitch” around 2018. The phrase was common with gamers and communities on message boards like 4Chan and Reddit.

Pepega is a BTTV emote used specifically on Twitch, and it originates from the “Pepe the Frog” character. Pepe is a popular emote and meme created by the comic artist Matt Furie, and he started to appear around corners of the internet in 2010.

Streamers on the Twitch platform will spam the chat with the emote. If they feel that someone is acting like an idiot in a game or saying something they find stupid, everyone will pile in to mock them.

The first known use of the “Pepega” emote is in a set of emotes uploaded to Twitch in 2018 by the user, “Adew” who also gets the credit for creating it. You’ll frequently see the emote alongside the text “For San.” “Forsen” refers to the iconic streamer, Sebastian Fors, who is responsible for popularizing the use of the emote on Twitch and in his subreddit.

“Pepega” is an emote used in online forums, chats, and streaming platforms. You wouldn’t use this word in conversation as most people outside of the gaming sphere won’t understand what you’re talking about or what you’re referencing.

You can use the Pepega emote in the chat on platforms like Twitch and on message boards like 4Chan and Reddit. Most people that visit these sites will understand the use of the emote and what you mean when placing it in the chat.