Are you at the street races? Chances are you’re seeing plenty of “ricer cars” at the venue. What is a ricer car? This post unpacks everything you need to know about the meaning and origin of this idiomatic expression.

A “ricer car” is a “JDM” vehicle where the owner has clearly overdone it with the external modifications to the car. You’ll find that the car has LED lighting, huge mag wheels, spoilers, fenders, styling kits, and a custom paint job.

While the owner will treat the car like their baby, it looks ridiculous to other people, and they will wonder why the owner chooses to spend so much money upgrading a low-end vehicle. Typically, “ricer cars” come from Japanese manufacturers like Mitsubishi, Honda, and Subaru.

The phrase also applies to any other manufacturer, as long as the look of the car is “over the top” due to the addition of aftermarket parts.

The phrase “ricer car” is common in the street racing and high-performance tuning community. However, it’s usually a derogatory term towards the owner and their car. In most cases, the person saying the phrase will use it in a mocking tone.

Ricer cars are more common on the west coast of the United States, but you can find them in countries across the world.

“Check out that ricer car in the lot over there; it’s hilarious. Look at the size of that wing and hood scoop; it’s almost comical.”

“The owner obviously took the mods too far with that ricer car; it looks more like a spaceship than a vehicle.”

“We’re going to the street races this evening. There’s going to be dozens of ricer cars at the meet.”

“That’s a real ricer car; I wouldn’t be caught dead behind the wheel.” 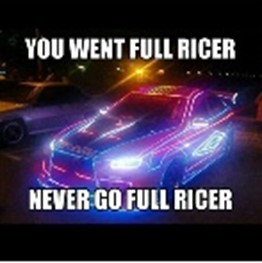 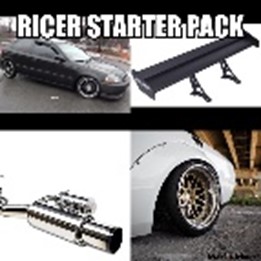 Experts can’t seem to pinpoint the exact origin of this phrase and when it first appeared as a meme or in media. However, many people think that the term would appear in the early 2000s, alongside the film’s release, “The Fast & Furious.”

According to the Rice University Neologisms, the term combines the words “rich” and “racer.” The reason for the “rich” in the phrase comes from the fact that it costs a lot of money to modify a car to a street racing format.

Some online car forums state that “RICE” is an acronym for “Race Inspired Cosmetic Enhancement.” However, there is no evidence to say that this acronym is the origin of the phrase “ricer car.”

Phrases Opposite to Ricer Car

Some people may use the phrase to describe a modified car that doesn’t look over-the-top with its customizations. A “ricer car” refers to vehicles that look almost comical. Therefore, using it to describe any other type of vehicle or a person that likes to race is the incorrect use of the phrase.

You can use the term “ricer car” when referring to a car that’s wildly over-modified to the point of ridicule or hilarity. The phrase suits use in the online world and real life, and it’s usually an offensive or mocking phrase designed to ridicule the owner’s need to over-modify their vehicle.