Did someone tell you something that’s blatantly obvious or you knew already? If that’s so, you could reply to them with “we been knew.” This post unpacks everything you need to know about the origin and meaning of this expression.

We Been Knew Meaning

To put it into everyday English, the phrase would translate to something like, “something was obvious from the outset,” or “we already knew that.” It can also be another way of saying the slang word, “duh,” or, in some cases, “I told you so.”

The phrase is part of street slang culture, known as “Ebonics,” named after the rapper “Big L,” who died in the late 90s. Big L was instrumental in bringing Ebonics and street slang into modern culture, and many of the sayings in his track, “Ebonics,” are in use today in street slang.

“We been knew” is an example of modern Ebonics, bringing the saying to widespread use after the death of Big L. It’s a popular saying, and there are dozens of memes featuring the expression on chat forums and sites like 4Chan.

We Been Knew Example Usage

“You’re only catching on to crypto now? Seriously, we been knew, and I’ve had my portfolio for years already.”

“Damn, son, we been knew that the crypto market was gonna explode, you need to catch up and buy some bitcoin.”

“What do you mean you’re falling for that scam? We been knew this was a Ponzi since last year already.”

“So, you’re planning on betting on Cowboy for the title. We been knew he was a bum since last year, and there’s no way he beats Gaethje.” 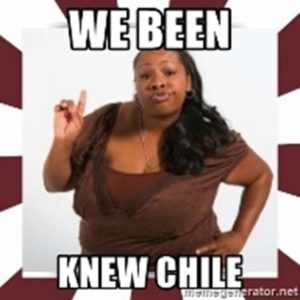 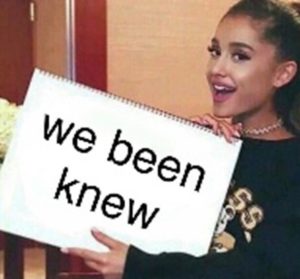 We Been Knew Origin

No one knows the origin of the idiomatic expression, “we been knew.” The phrase is not grammatically correct, and it’s a form of street slang used in the African American community. The first know use of the term appears in popular culture in the late 90s, but there is no written record of its original use in texting.

The phrase would gain popularity with the rise of hip-hop culture in the 2000s, and many young people started using the expression to describe that they are ahead of the curve or someone else is behind it. It’s common to hear the phrase in street discussions between young people, but you probably won’t find many adults using the term.

The first appearance of “we been knew” in the Urban Dictionary dates back to late 2017, with an entry by the user, “boyboyguywillfly.”

Phrases Similar to We Been Knew

Phrases Opposite to We Been Knew

Ways People May Say We Been Knew Incorrectly

People that don’t know street slang may use the phrase incorrectly to describe something “new.” You wouldn’t use this slang around seniors, as they would think you don’t properly understand the English language, and your grammar is terrible.

Acceptable Ways to Phrase We Been Knew