Are you looking for a way to describe something as the coolest thing you’ve ever seen? If so, you could use the phrase “bee’s knees.” This post unpacks the meaning and origin of this expression.

It’s somewhat archaic language and similar to phrases like “the cat’s pajamas.” Typically, the phrase suits use by older generations, and younger generations might find the expression somewhat archaic and silly. However, almost everyone knows what the saying means, and many people use it today.

“Man, Carvel really does make the best ice cream. It’s the best soft serve in America, and their milkshakes are the bee’s knees. Go give it a try and ask them to swirl the chocolate crunchy into the shake.”

“This bike is the bee’s knee’s thanks, mom; I’m going to go and take it for a spin right now.”

“Did you see how Steve-O managed to dodge that bullet, man? He’s the bee’s knee’s.”

“That birthday present was the bee’s knees, thanks, mom.”

“Wow, what a pizza; you guys are the bee’s knee’s when it comes to making a good pie.” 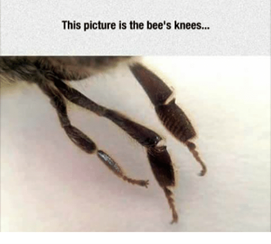 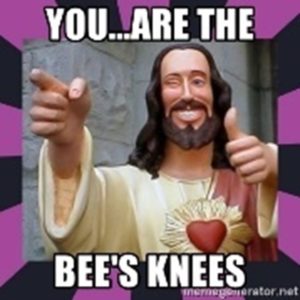 The origin of the expression “bee’s knee’s” comes from an 18th century fanciful phrase referring to something that doesn’t exist. Initially, the term means something that was a “spoof item,” such as a “left-handed hammer.”

There is no connection to the earlier use of “a bee’s knee.” In the early 18th century, this expression was common as a synonym for something appearing very small. This phrase appears in Mrs. Townley Ward – Letters, June 1797 in N. & Q.

Phrases Opposite to Bees Knees

The phrase doesn’t have any reference to bees or bees’ knees. It’s a way of saying something is the best there is. Using the expression to describe a bee’s knees is incorrect. The phrase is somewhat outdated, and not many people use it anymore, except as a platitude or cliché.

You can use the phrase “bee’s knees” when you’re trying to tell someone that an item, event, song, person, or anything you really like, is the best in its class. If something is the “bee’s knees,” it means that there is nothing better than it; it is at the top of its range or a class leader.