Are you thinking about heading to the local seafood restaurant for a meal? The waiter will likely offer you “al fresco” dining in the open air when you arrive. They may also offer to read you the “al fresco” specials of the day, but what do they mean?

This post unpacks everything you need to know about the idiomatic saying, “al fresco.” We’ll look at this phrase’s meaning, origin, and use in conversation.

The meaning of “al fresco” has changed since its original inception. It started as a way to describe a painting, like the Sistine chapel. The word also describes the act of sending someone to jail. The term later moved into the English language, changing its meaning again.

Today, the meaning of “al fresco” is “fresh.” Some people interpret this as “fresh” weather outdoors, and that’s why it moved into the phrase “al fresco dining,” describing eating in an outdoor venue.

The “fresh” part of the phrase also applies to fresh food, particularly seafood. So, if you go to a seafood diner for a meal, the waiter will tell you about the “al fresco” platter or special of the day, and he’s referring to seafood caught that day.

You’ll use al fresco more in restaurant situations to describe open-air dining and fresh food, more than the other earlier definitions of the phrase.

“We decided to dine at a restaurant “al fresco” on the pier.”

“The waiter informed us of the specials of the day and the al fresco seafood platter.”

“We decided to escape the office, holding our Zoom meeting out in the courtyard, al fresco.”

“The criminal received a life sentence, and the court whisked him away al fresco.” 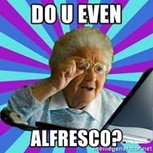 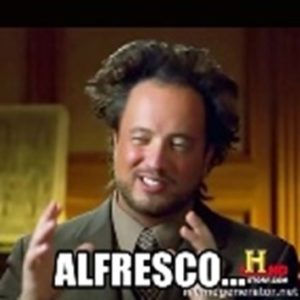 The origin of the phrase “al fresco” traces back to Italian roots. The original use of the term described throwing someone in jail. Still, the expression changed its format over the years to mean “fresh” or “open-air,” which is why it often features in restauranteur terms for eating outdoors, or dining on fresh food, such as seafood, caught that day.

Both definitions of the phrase appear in English as far back as the late 18th century. The first use of the phrase in literature comes from Mrs. Eliza Haywood’s “History of Jemmy and Jenny Jessamy,” authored in 1753. The book uses the phrase in the following excerpt.

“It was good for her ladyship’s health to be thus alfresco.”

The phrase also describes paintings in the early 1700s, in the translation of “The laboratory; or, School of arts,” written by Geoffrey Smith in 1717. The phrase appears in the following excerpt from the book.

“Christopher Swartz, died 1594. He got himself renowned by painting al Fresco.”

However, the phrase no longer applies to the art of painting. The modern use of the term pertains to food and restaurant culture more than painting or jail terminology.

Phrases Opposite to Al Fresco

Some people may confuse the “fresco” with the paintings of renaissance artists, such as Michelangelo. The Sistine Chapel is an example of a “fresco,” but the modern use of “al fresco” has nothing to do with paintings.

You can use “al fresco” to describe outdoor seating areas that are cool and fresh. You can also use the phrase to describe a meal made with fresh ingredients. While the term also means sending someone to prison, it rarely appears in this format in the English language. The phrase suits professional and social conversations.