Are you feeling sick after eating at a Mexican restaurant? If that’s the case, you could say you are suffering from a case of “Montezuma’s revenge.” This post unpacks the meaning and origin of this expression.

Montezuma’s revenge is a slang term for food poisoning affecting white travelers in Mexico. However, the expression can apply to any racial group. The primary meaning of the phrase is travelers’ diarrhea, caused by eating tainted food that makes the traveler sick to their stomach.

The phrase can refer to stomach pain, diarrhea, or vomiting induced by eating bad Mexican food. While the term typically refers to Mexican food, as it is the closest border to the US, it can apply to any Latin food, and some countries may use adaptations of the phrase referring to Indian food.

You could experience Montezuma’s revenge from eating at restaurants in Mexico or the local Mexican restaurant in your neighborhood in the United States. Typically, the phrase refers to the negative after-effects of eating any type of Mexican food that leaves you feeling sick.

“I went over the border to Mexico with friends on the weekend. We ate at this quaint restaurant out of the way. It was a bad idea; I had the worst case of Montezuma’s revenge, ever.”

“Dude, I ate out of the Mexican food truck down the block yesterday afternoon. I got Montezuma’s revenge, and I’m still on the toilet.”

“Don’t order from that Mexican place in town. They don’t clean their kitchen, and you’ll end up with Montezuma’s revenge.”

“I wish I knew how to make tamales myself. Every time I order them at a Mexican restaurant, I end up with Montezuma’s revenge.”

“What do you mean you’re eating at that restaurant again? Didn’t I tell you I got Montezuma’s revenge last time I ate there?” 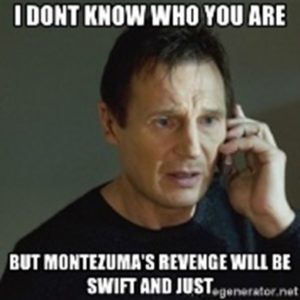 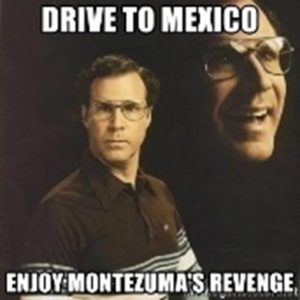 The expression’s origin, “Montezuma’s revenge,” comes from Moctezuma II. Moctezuma II was the Aztec leader slain by the Spanish conquistador, Hernán Cortés. The Spanish would slaughter the entire population when conquering South America.

Therefore, using “Montezuma’s revenge” means that the Aztec leader is exerting his revenge from beyond the grave by making the person sick by eating local Latin cuisine. It’s a somewhat ironic expression, as many of the people eating the food are white, and they end up experiencing food poisoning that makes them wish they were dead.

No one knows why the spelling changed from “Moctezuma” to “Montezuma,” swapping the “c” for the “e” in the expression. The first use of the phrase appears in the 80s, but no one knows the exact date or how it entered the modern culture.

Phrases Opposite to Montezuma’s Revenge

Some people may write the phrase incorrectly, using the original spelling of “Moctezuma” instead of “Montezuma.” While the former spelling is correct, it’s not the proper use of the phrase. Some Mexican people and Latin Americans may find the phrase offensive, seeing it as a racial slur.

You can use “Montezuma’s revenge” when you’re trying to describe a bad case of diarrhea brought on by eating tainted Mexican food. The phrase specifically applies to spicy food, referring to vomiting or diarrhea. It can also refer to passing stool that leaves you with a burning sensation due to the spices in the food. However, the phrase may have a racist overtone since you refer to bad Mexican food.