Did your colleague call into work and tell you that they are feeling “under the weather” and won’t be in today? What do they mean? This post unpacks everything you need to know about this idiomatic expression’s meaning, origin, and use.

Under the Weather Meaning

If you’re feeling “under the weather,” it means that you are feeling unwell. People typically use this expression to let people know that they are sick, and you probably hear it all the time. People will usually use this expression to tell you that they are sick, but it’s not a life-threatening illness, and you probably aren’t going to need to go to the doctor or the hospital for treatment.

In most cases, you’ll use it to say that you feel bad, but you expect to recover from the illness soon. You can use the phrase at home or in professional settings, and it’s a common expression used throughout the English-speaking world.

For instance, you could tell your boss that you’re feeling under the weather and you won’t be coming into the office today. Or you could use the phrase to tell your friends you won’t be joining them for your dinner plans because you’re not feeling great.

Under the Weather Example Usage

“Hey, Angela, can you tell the manager that I’m not coming in today? I’m feeling under the weather. I think I caught a cold.”

“I’m feeling a bit under the weather today, Ray; I’m going to stay in bed; could you get me a cup of tea, please?”

“I was feeling okay this morning, but no, I feel under the weather; I’m going home to get into bed and sleep it off.”

“Greg looks under the weather today; I hope he didn’t come to work sick; I don’t want him spreading his germs around the place.” 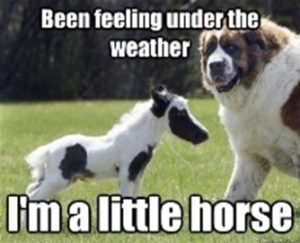 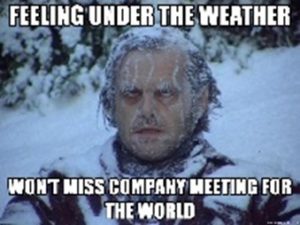 Under the Weather Origin

The phrase “under the weather” has its origin in the maritime industry. When sailors felt ill, they would retreat under the deck to wait out their illness and recover. As a result, the sailor was safe and warm, away from the harsh weather above him on the deck.

A book called “Salty Dog Talk: The Nautical Origins of Everyday Expressions” published by Bill Beavis and Michael Howorth uses the phrase in the following context.

“The term is correctly ‘under the weather bow’ which is a gloomy prospect; the weather bow is the side upon which all the rotten weather is blowing.”

The earliest mention of the phrase in print occurs in “The Jeffersonville Daily Evening News,” in 1835, where it reads.

“‘I own Jessica is somewhat under the weather today, figuratively and literally,’ said the gentleman, amusedly, giving a glance at the lady over in the corner.”

Phrases Similar to Under the Weather

Phrases Opposite to Under the Weather

Ways People May Say Under the Weather Incorrectly

You would not use the phrase to describe the weather at sea. You would also refrain from using it when you feel very sick, possibly with life-threatening conditions. For example, someone suffering from the effects of chemotherapy treatments is not “under the weather“; they are very ill.

Acceptable Ways to Phrase Under the Weather

You can use “under the weather” when you want to tell someone you’re not feeling well. Typically, the phrase refers to mild sicknesses, such as the flu or a cold. You can use the term at home or work to describe yourself as unfit and unable to carry out your regular duties.