Did you just take a selfie of yourself, and you think you look good in the lighting? You could post it to your Instagram with the caption, “feeling cute, might delete later,” and see what other people think before you decide to keep or delete it.

This post unpacks the meaning and origin of this idiomatic expression.

The phrase usually appears in a meme or as a caption on a photo. It’s popular on social media sites, gaming platforms, and message boards. Most of the images involved are selfies of the poster, and in most cases, they feature emojis in the caption.

The expression has several variations, such as “Feeling cute, might delete later idk tho.” Over the last five years, the phrase changed significantly, resulting in several online variations. If you’re using the phrase, it typically means that you don’t have a lot of self-confidence.

“Feeling cute might delete later idk tho.” You’ll be using this phrase as a statement to gain attention from other people. Most people who add the caption to a photo seek approval from their following. 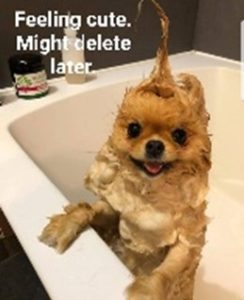 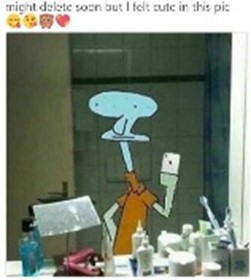 “Feeling cute might delete later” is a relatively new idiomatic phrase appearing in modern culture. The saying showed up on Twitter in 2017, with the user @PapaCone_ tweeting a meme featuring an image of Squidward from the animated show “SpongeBob SquarePants.”

Squidward is taking a selfie, with the caption, “feeling cute now, might delete later.” The tweet went on to receive more than 43,000 likes and 18,000 retweets. 2019 saw the creation of the #FeelingCuteChallenge hashtag, where participants share silly, comical images featuring the caption “feeling cute, might X later.” 2017, saw Twitter user @DankMemes posting a photo of a dog taking a selfie. The caption for the picture reads, “might delete soon, but I felt cute in this pic.” The tweet went on to gain more than 13,000 likes and 7,500 retweets.

The next iteration of the phrase appeared in late 2017, with Twitter user @laogn posting a picture of a Club Penguin taking a selfie. The caption for the image reads, “might delete this later idk I just thought I looked cute.”

The meme made several appearances in different formats over the next three years. It’s still a common caption to add to photos and images shared on platforms like Twitter and Reddit.

This idiomatic phrase is common on message boards and social media. However, it doesn’t feature in regular face-to-face conversation very often. Don’t use the term around seniors as they might not understand its meaning.

You can use “feeling cute, might delete later” as a caption in an image, typically of yourself. This idiomatic phrase features in social media posts and chats or message boards. You can use the phrase when you’re trying to tell people that you felt good about yourself and your looks, but that might change later.