Did someone just serve you some food right out of the oven.? If so, they may turn to you and tell you that it’s “piping hot” before walking back to the kitchen. This post unpacks the meaning and origin of this phrase.

The meaning of the phrase “piping hot” refers to the temperature of food right as it comes out of the oven. To serve a “piping hot” meal means that the meal is almost too hot to eat, and the person must wait for it to cool before enjoying it.

If something is piping hot, it’s probably a good idea to let it cool down for a while. We’ve all had the experience of biting into something overly hot and burning our mouth or tongue. The phrase serves to warn that the food is too hot to eat right now.

The phrase commonly refers to food and beverages, not to other items.

“Man, this pizza is piping hot! I took a bite, and it burned the top of my mouth. Does anyone have some ice water?”

“That pie is piping hot. Leave it on the windowsill to cool for an hour. We’ll whip the cream while we wait.”

“You can expect that stew to be piping hot when you take it out of the oven. Let it cool off before we start serving it to the guests.”

“Wow, this hot chocolate is piping hot! I burned my lips and tongue on it, but it tastes so good I can’t stop drinking it.” 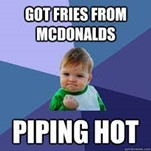 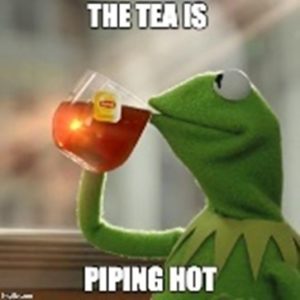 The origin of the expression “piping hot” traces back to use in Scotland. During feasts, servers would bring the food to the table accompanied by musicians playing the bagpipes, a process called “piping in.” As a result, the food would arrive at the table “piping hot.”

However, some language experts dispute the origin of the term. Most people agree that the expression evolved from the sound of a pie whistling on the windowsill. The pastry would make a whistling sound as the hot steam escaped from the filling through the crust.

However, the phrase can apply to any food that makes the sound of air escaping when hot. The earliest use of the term comes from Philemon Holland’s translation of “Pliny’s Historie of the world” in 1601.

“Beanes… fried all whole as they be, and so cast piping hot into sharp vinegar.”

Chaucer also used the phrase in The Miller’s Tale, circa 1390, but in archaic language, where it reads as follows.

And wafres piping hoot out of the glede.”

Phrases Opposite to Piping Hot

Some people may use the phrase “piping hot” to describe other hot items other than food. While this is not technically incorrect, it’s not the correct use of the saying. “Piping hot” specifically refers to the temperature of food, not pipes or other items.

You can use the phrase “piping hot” when you’re trying to describe that food coming off the stove or out of the oven is very hot. The term implies that the other person should avoid eating the food immediately and let it cool.

If they go against your advice, they might end up burning their tongue or mouth. Something “piping hot” is too hot to handle and requires cooling. You could use it to describe oven-fresh pizza, a piece of fried fish, and many other foods, like pies and hot beverages.