Are you listening to someone make outlandish claims of getting rich quickly? If so, you could say their promises are nothing more than “pie in the sky.” This post unpacks the meaning and origin of this expression.

The meaning of “pie in the sky” is to tell someone that the promises mean nothing or expect the person making the claims or promises to default on your expectations of materializing them. In most cases, you’re using it to say that the person has “delusions of grandeur” and that there is no way they can follow up on their promises.

“That politician’s promises are nothing more than pie in the sky. Watch, as soon as they get in office, they’ll put their feet up and do nothing.”

“Your dreams of being an airplane pilot are pie in the sky, Matt. You can’t see three feet in front of your face without your glasses.”

“That was all just empty promises and pie in the sky. How anyone can fall for these fake guru scams is beyond me.”

“That crypto project was just pie in the sky promoted by influencers so they could rug pull the liquidity pool.”

“Whenever someone promises you something that sounds too good to be true, it’s probably just pie in the sky.” 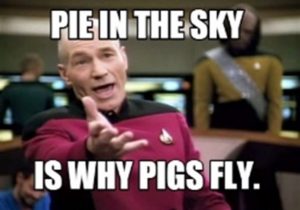 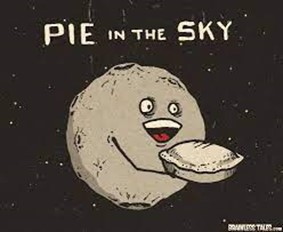 The origin of the expression “pie in the sky” comes from a saying coined by Joe Hill in 1911. The Swedish-born Hill immigrated to the United States in the early 1900s. Hill became the leader of the radical labor organization, “The Industrial Workers of the World,” with its members known as “the Wobblies.”

Hill would go on to write many radical songs for the group. “Pie in the sky” first appeared in Hill’s work, “The Preacher and the Slave,” a parody of the hymn “Sweet bye and bye” by the Salvation Army.

“From the day of your birth, it’s bread and water here on earth

The song took a poke at the theology of the army, specifically its concentration on salvaging souls rather than feeding the hungry. The track was popular at the time and remained in circulation for years.

Phrases Similar to Pie in the Sky

Phrases Opposite to Pie in the Sky

Ways People May Say Pie in the Sky Incorrectly

The expression “pie in the sky” does not literally mean pie being in the sky. You wouldn’t use this phrase unless you told someone that there is little chance of what they are talking about coming to fruition. The term suits the mockery of outlandish ideas, not something that is possibly attainable. So, using it to describe someone’s goal of losing weight would be the incorrect use of the expression.

Acceptable Ways to Phrase Pie in the Sky