Are you looking to tell someone that you’re going to go into a task with the attitude of doing whatever it takes to complete it? If so, you could say you’re taking a “no holds barred “approach to the project. This post unpacks the meaning and origin of the expression.

The meaning of “no holds barred” is “without rules.” The expression comes from the sport of wrestling, but many people attribute it to the “vale Tudor” competitions that started the sport of MMA. Organizations like “Pride” in Japan would host “no holds barred” matches involving the use of hands, legs, and even headbutts in the fight.

The sport grew in popularity in the 1990s, with the introduction of the “Ultimate Fighting Championships” (UFC) by the legendary Gracie family. The event saw Royce Gracie becoming the first champion in the organization’s history.

“Are you ready for that new no holds barred fighting league that’s starting next month? I hear that a lot of UFC and Bellator stars are moving to it because of the pay they’re offering.”

“That was a real no holds barred matchup between those fighters. They both poured themselves into that matchup, and both men come out of the ring leaving some part of themselves on the mat.”

“I want you guys to take a no holds barred approach to collecting leads. There is no such thing as a bad prospect; it’s just an opening to someone else that needs our product.”

“This club has a kind of no holds barred approach to how you want to enjoy yourself. They don’t care what you’re doing as long as you’re spending money.” 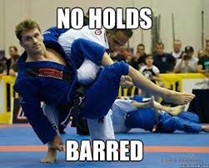 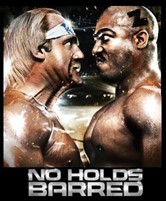 The origin of the term “no holds barred” comes from the sport of college wrestling. Wrestling competitions operate under the FILA, governing body guidelines. Each type of wrestling has a specific set of rules tailored to the sport.

However, before establishing rules and a governing body, wrestling was a more freestyle affair. Purists who wanted to get back to the roots of wrestling would often hold “no holds barred” tournaments, where no new rules apply to the wrestling match.

The earliest reference of the phrase in print comes from 1892. The Manitoba Daily Free Press used the term in a column in February 1892, where it reads as follows.

Hulk Hogan also brought popularity to the expression after starring in the 1989 film “No Holds Barred.” The tagline for the movie was “No Ring. No Ref. No Rules.”

Phrases Similar to No Holds Barred

Phrases Opposite to No Holds Barred

Using the phrase to refer to hugging is the incorrect use of the term. “Holds” refer to wrestling holds, not hugs or embraces. There is usually a stern tone of authority issued with the saying to let the other person know that this is a serious situation. Therefore, saying it in a lighthearted fashion is the improper use of the expression.

You can use “no holds barred” in place of “no rules” or “no terms and conditions.” It’s a way of saying anything goes, and it can apply to several scenarios. For example, your boss could tell you to take a “no holds barred approach” to lead generation.

Or you’re MMA coach could be preparing you for a “no holds barred” matchup with another competitor. The phrase suits social and professional situations, and it signifies that you’re willing to do whatever it takes to make something happen.