Are you looking for a way to call someone uncultured or unsophisticated? If so, you could call them a “country bumpkin.” This post unpacks the meaning and origin of this expression.

The expression “country bumpkins” means a person with no culture or sophistication. They have crude behavior and don’t know how to conduct themselves properly around others. They may be a subject of embarrassment, and they don’t fit in at an event or location.

Typically, it’s somewhat of a slur or derogatory statement. People living in cities will use it because they think they have moral superiority over outsiders due to their education and status. It’s also a way of telling people who have status with their peers that they behave like people beneath them, and they should stop what they are doing immediately.

“Look at those country bumpkins over there. They’re so loud, and it’s like they don’t know how to behave around people. What a bunch of deplorables.”

“You are all a bunch of country bumpkins, and you need to go back to the farm. You don’t belong around these sophisticated people, so be gone with you.”

“Stop acting like a bunch of country bumpkins. Your mother raised you better than that.”

“Mitch is such a country bumpkin. Did you see how he arrived at that black-tie event in his cowboy boots and a tux?” 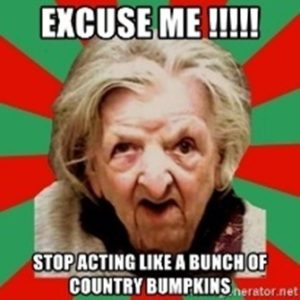 However, experts agree that the use of the term “country bumpkin” appeared in English sometime in the 1500s. The first use of the phrase in old English comes from Lord Windsor in 1658 appears in the following format.

“May I not looke more lyke a bumking than the rest.”

“Bumpkin” became the accepted spelling before the 1700s, and by that time, the word meant “ignorant or stupid person.” Lord Chesterfield gets the credit for the use of “country bumpkins” in 1774 with the following observation.

“A country bumpkin is ashamed when he comes into good company.”

Phrases Opposite to Country Bumpkins

The phrase is not suitable to describe everyone from the countryside. It’s a generalization that applies to people outside cities that lack the refinement and sophistication of living in the city. Many people view it as an insult, so saying it to people in a derogatory tone could get you in trouble.

You can use the phrase “country bumpkins” when you’re describing people that don’t have the refinement of city living etched into their behavior. They may not be well-dressed, and they use slang and colloquial language that’s challenging to follow.

In essence, the saying is a way of telling someone they are unrefined in their dress, speech, and presentation. You’re telling them that they don’t belong in the situation and should remove themselves  from the social circle they are trying to penetrate.