Have you ever heard the slur, “Jewish lightning?” If so, it’s a racial stereotype against Jewish culture. While this slur has no place in modern language, we’ll unpack its origin and meaning in this post.

Jewish lightning is a derogatory phrase showing the differences in culture during the 50s and 60s and how each community would make stereotypical slurs about the other. “Jewish lightning” is a slue created primarily by the Italian and Irish communities towards the activities of Jewish business owners during the recession.

In the 1970s, the economy was in a bad cycle, and many businesses were going bust as inflation got out of control. When the Federal Reserve intervened to prevent inflation from causing an international economic crisis, many more companies went under.

Jewish business owners would supposedly burn down their business instead of watching it go under in response to the economic conditions. They would collect the insurance and use it to start another business or save it until the economy recovered.

However, using this slur in modern society will likely land you in trouble. Not only are you accusing someone of arson, but you’re also making a racial stereotype. As a result, there are likely to be plenty of people that call you out on it, especially if you use it on social media.

Friend 1: “Did you hear that Bob’s restaurant was going through hard times before it burned to the ground?”

Friend 2: “Sounds like some Jewish lightning there to me.”

Friend 1: “John said his company’s factory burned down so they could collect the insurance money.”

Friend 2: “That’s not a legitimate fire claim; it’s Jewish lightning for sure.”

Friend 1: “I heard the local supermarket burned down because of bad electrics.

Friend 2: “I bet it had a problem with Jewish lightning, not the electrical circuit.” 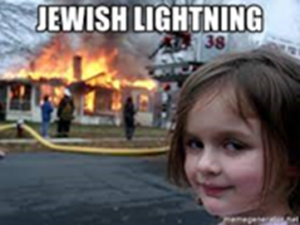 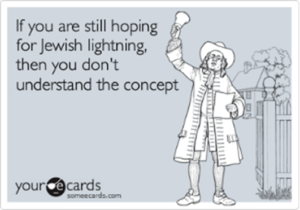 The phrase, Jewish lightning originates from the Italian American mob back in the 50s and 60s. During this time, New York crime families would interact with Irish and Jewish communities. Each community had stereotypes, and the other communities would create slurs to define these stereotypical characteristics.

The phrase means that a Jewish person would do anything to get their hands on more money. They would even resort to burning down their business if it turned unprofitable, just to get the insurance money. When the recession hit the economy in the 70s, many Jewish business owners would end up burning down their businesses to collect the insurance money rather than see the company go under and lose their life savings.

The phrase is highly derogatory and offensive to Jewish people. The Urban Dictionary first defined “Jewish lightning” in 2004. The author, Barry Zack, published “Jewish Lightning: So, What Could Go Wrong?” in 2015.

Phrases Opposite to Jewish Lightning

People may use Jewish lightning incorrectly without understanding the meaning and origin of the term. Jewish lightning is a derogatory idiomatic phrase. It doesn’t have any place in a free and fair society. Therefore, using the words in any social or professional setting is unacceptable.

“Jewish lightning” is not acceptable for use anywhere in modern society. It’s a derogatory slur against the Jewish people and doesn’t deserve a place in modern language. Using this idiomatic phrase on social media could result in you receiving a ban from the platform and plenty of bad comments towards your use of the language.