Are you at a bar with friends, and one of them says, “I’d buy that for a dollar” while they point out a group of girls? What do they mean exactly? This post unpacks everything you need to know about this idiomatic expression’s origin, meaning, and use.

“I’d buy that for a dollar” is a TV show saying. It’s a popular cultural slogan, and you probably heard it a lot if you were around in the late eighties and the early nineties. The saying comes from the 1987 blockbuster hit Robocop, and it’s a phrase used by the actor “Bixby Snyder” in a scene where they’re watching TV.

David: “Look at that girl over there; she’s so hot.”

Cliff: “Look at that mansion, right on the beach in Malibu.”

Reg: “That guy is so lucky; that girl is all over him.” 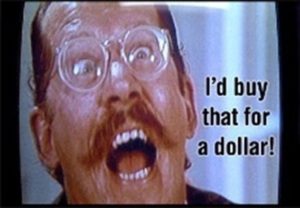 The origin of the phrase, “I’d buy that for a dollar,” comes from the 1987 sci-fi thriller “Robocop.” The character of “Bixby Snyder” in the movie uses the line as his catchphrase while surrounded by beautiful women. The phrase has a somewhat sexist overtone to it, suggesting that Bixby would pay $1 for the woman in the video with him.

Robocop was an R-rated movie at the time, and the line “I’ll buy that for a dollar” was his catchphrase in the film, and many people started using it due to its success at the box office. The memes of Bixby started appearing on Reddit and other platforms like 4Chan in 2010, and it’s a well-known meme across most age groups and generations.

While Bixby and Robocop get the credit for the modern popularization of the phrase, it papered many decades before in the 1951 science fiction work “The Marching Morons” by Cyril M. Kornbluth. The story features the use of the phrase, “Would you buy it for a quarter?” The context surrounding the use of the phrase is very similar to its use in Robocop some near 50-years later.

Phrases Similar to I’d buy that for a dollar

Phrases Opposite to I’d buy that for a dollar

You wouldn’t use the phrase, “I’d buy that for a dollar” when talking to women unless you felt very confident. Most women would find the use of the term derogatory, and you might end up with them cussing at you, slapping you, or telling other people about your transgression. Using the saying online could end up with people ganging up on you for your lack of respect for women.

Acceptable Ways to Phrase I’d buy that for a dollar

You can use the phrase “I’d buy that for a dollar” when you’re referring to being willing to pay money for something you want that looks appealing. Typically, the phrase has a sexual connotation, involving men saying it to women. However, the term can apply to anything that seems attractive and worth paying for owning or using. Some women may have a problem with the phrase having a misogynistic meaning.