Are you at the gym, and your friend is complaining about how hard the workout is today? If that’s the case, you could always tell him to “embrace the suck” and get on with the training.

Embrace the suck means to enjoy the pain while it lasts because it’s making you stronger. Life is a balance of risk and reward, and the more you sacrifice today, the better off you will be tomorrow.

Embrace the suck is another one of the cliché fitness terms you’ll see pasted across many posters. The images will usually feature a grainy photo of some jacked guy ready to go to battle or suffering through athletic hardship.

“C’mon men, embrace the suck, push past the pain and make something of yourselves. Don’t give up, don’t quit, keep pushing through the pain.”

“Embrace the suck; it’s going to build your character and get you through the tough moments in your life.”

“I was out at training today, and my trainer told me to embrace the suck and push past my limits. I ended up hitting a new PR on the bench.”

“Embrace the suck and get through the paperwork; you’ll be glad when it’s over.” 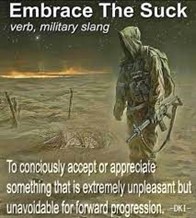 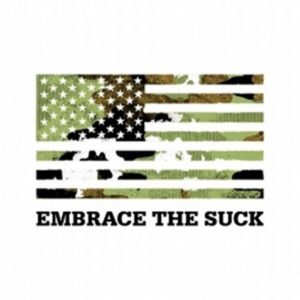 “Embrace the suck” is a military term that has origins from around the late 70s. It increased with use throughout the 80s and 90s, and it spread into popular culture in the late 90s and early 2000s, with the rise of the fitness industry. Today, you’ll find the saying plastered on motivational memes and other images.

“Embrace the suck” originates from the pain that SEAL candidates would endure during the BUDs training program, specifically the “Hell week” program. Hell Week requires severe self-discipline and mental strength and focus on completing the training without dropping out.

Austin Bay published a book in 2007 with “Embrace the Suck” as the title of the work. The term has a military feel to it, but it can also apply to many other situations in life where you have to strengthen your physical and mental will to overcome a challenge.

The Urban Dictionary defined the term back in 2008, and memes and motivational posters featuring the saying started appearing on the internet in the late 2000s to early 2010s.

Phrases Similar to Embrace the Suck

Phrases Opposite to Embrace the Suck

Some people may say “embrace the suck,” making the wrong reference to “suck.” For instance, they may use suck to describe their attitude rather than circumstances. To embrace the suck means that you persist through challenges, not enduring someone boring or tedious.

You can use the phrase “embrace the suck” if you’re telling people to persist through something that seems challenging in their life. It could be anything from a hard workout at the gym to a mental health issue where they need to be more assertive with their approach to life. Embrace the suck is somewhat of a played-out cliché, especially in the fitness world. There are thousands of memes and motivational videos in the title and captions.