Are you looking for a way to tell someone that they just fell short of their target? If that’s the case, you could use the saying, “close but no cigar.” This post unpacks the meaning and origin of this saying.

The meaning of the expression “close but no cigar” refers to someone narrowly missing their target or goals. A cigar is a symbol of success and achievement, and leaders like Winston Churchill would smoke cigars as a symbol of status. By saying that the person doesn’t deserve a cigar, you’re telling them that they didn’t do enough to deserve success for their efforts.

It’s a motivating statement telling the person to try again. You’re saying that they almost achieved their target or goal, and it’s possible that they could make it if they try again. The phrase’s meaning is to let a person know that they failed, but they were close to getting what they wanted.

“Aww, Jamie, that was close, but no cigar. Next time lift your foot back onto the board after spinning it, and you’ll find you land it perfectly.”

“I saw you over there trying everything to close the client. It was close but no cigar; you couldn’t overcome their final objection, and they walked.”

“The Patriots almost took the game. That last-minute hail Mary was close, but no cigar and the Rams walked away as the Superbowl champions.”

“You almost had it there, close but no cigar. The real culprit was Angie, and the police never caught her. She’s still out there right now, and no one knows where she is.”

“You almost got me that time Robbie, close but no cigar for you, my friend.” 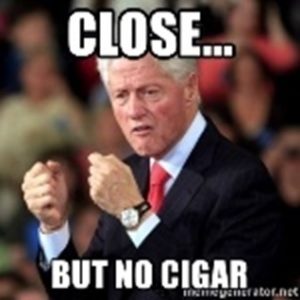 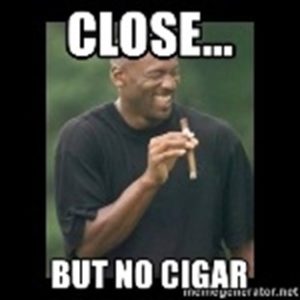 The first use of “close but no cigar” is in Sayre and Twist’s script for the 1935 film adaptation of “Annie Oakley,” It appears as follows.

“Close, Colonel, but no cigar!”

The saying would appear in American newspapers from around 1949, with “The Lima News” using it in an article in November 1949. The Lima House Cigar and Sporting Goods Store avoided burning to the ground in a fire, with the title of the article reading, “Close But No Cigar.”

Phrases Similar to Close but No Cigar

Phrases Opposite to Close but No Cigar

Ways People May Say Close but No Cigar Incorrectly

Acceptable Ways to Phrase Close but No Cigar

You can use the phrase “close but no cigar” when you’re telling someone that they gave it their best attempt but just fell short of their target. The term suits professional and social use. For instance, you could say the phrase to a colleague after a prospect turns down their pitch at the last minute. Or, you could say it to a friend when they come close to landing a skateboard trick but don’t quite pull it off.