Are you looking for a way to compliment someone on their laid-back, easy lifestyle? If so, you could say they are living “the life of Riley.” This post unpacks the meaning and origin of this expression.

The expression “the life of Riley” means that you have an easy and stress-free lifestyle. It’s a way of telling someone that you don’t have many responsibilities, have sufficient finances, and have all the necessities in life to get by.

It doesn’t necessarily mean that you don’t have materialist possessions or live on a farm. It means that you’re comfortable with your life and you live in a stress-free environment. For instance, you could live off-grid, grow your food, and never work in a traditional job. That would be the life of Riley.

However, you could also be a lottery winner and never have to work again, with all the money you need for the rest of your days. This situation could also be the life of Riley.

“The life of Riley is an easy-going experience. I don’t know what those city people have going on that makes their lifestyle so busy.”

“Ever since we decided to downgrade and clear our debt, we’re living a simpler lifestyle; you could call it the life of Riley.”

“Man, that couple do live the life of Riley. Whenever I see them, they are so relaxed and laid back.”

“Sure, I’m not making huge amounts of money, but I’m happy living a simple life I can control. The life of Riley isn’t for everyone, though.”

“I haven’t seen Kim in ages; she’s living the life of Riley somewhere out in the countryside.” 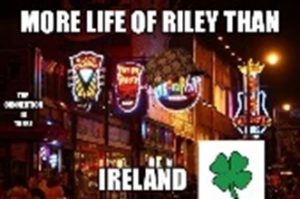 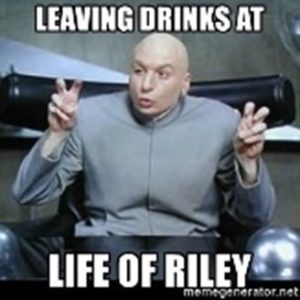 The origin of the saying “the life of Riley” comes from the period around World War One. The first appearance of the expression in writing comes from the New Jersey newspaper “The News” in May 1910.

“Henry Mungersdorf is living the life of Riley just at present.”

The phrase experienced adoption by men serving in the military at the time. The first known military example of the use of the term comes from Sergeant Leonard A. Monzert of the American Expeditionary Forces. The Sergeant wrote a letter while in France, with an excerpt from it appearing in “The Brooklyn Daily Eagle” in May 1918.

The letter shows Monzert using the expression “life of Riley” to describe how his friends were enjoying their lifestyle away from home.

Phrases Similar to Life of Riley

Phrases Opposite to Life of Riley

Some people may use the phrase to describe the life of a person named Riley. They may also use it incorrectly to refer to Irish culture. The expression has nothing to do with Irish people or specific individuals named Riley. Using the saying to describe someone’s life of hardship is also the incorrect use of the phrase.