Are you looking for a way to describe calm, stress-free days in your life? If so, you could call them your “halcyon days.” This post unpacks the meaning and origin of this expression.

The meaning of the expression “halcyon days” is peace, serene, and calm days in your life. It’s a period where you feel carefree and safe, with no pressure or stress weighing down your mental health. The “Halcyon” is another name for a Kingfisher bird and the subject of a Greek myth.

The “halcyon days” actually have a slot in the calendar, usually starting from the 14th or 15th of December each year. During this time of the season, the wind is calm, and there are few storms around. So, applying this calendar term to your life means that you are living a peaceful, relaxed lifestyle.

Some people may use this to describe their retirement years or adolescence, where they have few responsibilities in life and can unwind their commitments.

“I like to sit back and reminisce about the halcyon days of my youth. It was such a peaceful and calm time growing up on the farm in Montana.”

“We’re enjoying the halcyon days of our retirement. This facility has all the amenities we need, and it’s a calm and peaceful life.”

“We all long for those halcyon days where we had no responsibilities and no worries. I hope they are around the corner because life is hard right now.”

“How I miss those halcyon days of youth where all we did was lay around in the fields all afternoon.” 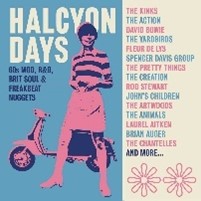 The origin of the term “halcyon days,” comes from the Latin word, “Alcyone,” which derives from the Ancient Greek Ἀλκυόνη (Alkuónē), who was the daughter of Aeolus. The story goes that after losing her husband in a shipwreck, Alcyone threw herself overboard, and the gods turned her and her husband into kingfisher birds, otherwise known as “halcyon birds.”

The myth continues, saying that the waves would destroy it when Alcyone nested on the beach. So, Aeolus calmed the winds during seven days of the season each year, allowing Alcyone to lay and nest her eggs. This period was the “halcyon days.”

In the 16th century, the meaning of “halcyon days” shifted to meaning calm, serene days. Shakespeare would use the expression in his 1592 play, “Henry VI,” where it appears in Part I of the play.

“Assign’d am I to be the English scourge.

Since I have entered into these wars.”

Phrases Opposite to Halcyon Days

Some people may confuse Halcyon days with other expressions like “judgment day,” which has a negative connotation. Halcyon days are joyful and blissful, not a cause for concern. It’s also common for people to misspell “halcyon days” as “halycon days.”

The phrase suits professional and social use. For instance, your business could recall the halcyon days when things were going well. “Halcyon days” refers to calm and peaceful times. You could be living them in the current timeline. Or in the past.