Did your friend do something crazy? You could call them a basket case to describe their behavior. This post unpacks the meaning and origin of this expression.

The expression “basket case” means someone wild or crazy. It can refer to someone that’s genuinely mentally ill or enjoys adopting a risk-taking approach to life. A basket case could refer to someone dealing with severe stress or anxiety and who feels like they’re going crazy.

A “basket case” can also refer to someone that enjoys activities that seem outlandish or crazy to others. A “basket case” might be someone who acts outside the normal paradigm of what people consider “sane” behavior.

“That guy is a basket case. You can’t trust what he tells you. He’s always doing crazy stuff, and his temperament is erratic.”

“Mark is a basket case. He’s mentally ill and needs help. We must sit down with him and tell him he needs to see a therapist.”

“Are we going over to Tom’s place? That guy is a basket case. He’s fun to be around most of the time, but sometimes he scares me with his antics.”

“There’s no way I’m going with you to Carissa’s place. That girl is a basket case. I’ll never know how she expects to hold down a relationship.”

“I always knew you were a basket case, and now you proved it to me. Let me out of here. I’m going now before someone gets hurt.”

“If there was ever doubt you were a basket case, it’s out of the window now. After last night, I’ll never look at you again.”

“That president is a real basket case. He wants the UN to create a no-fly zone over his country. That action would kick off World War III.”

“These people are basket cases. They’re all high on drugs and wandering around like zombies. I’m never going downtown again.” 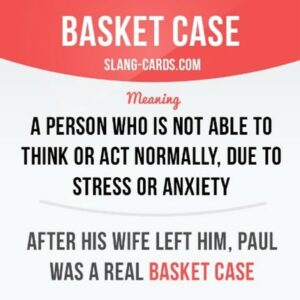 The original use of “basket case” didn’t refer to someone that’s crazy. The first use of the expression was to refer to a disabled person. The phrase comes from WWI, appearing in an article by the United States Surgeon General in March 1919, which reads as follows.

“The Surgeon General of the Army denies that there is any foundation for the stories that have been circulated of the existence of basket cases in our hospitals.”

The first definition, published in The Syracuse Herald, reads as follows.

“A soldier who has lost both arms and legs and therefore must be carried in a basket.”

The term fell out of favor after WWII. The modern use of the phrase to describe someone wild, unstable, or mentally ill appeared in the late 1970s, but there is no information on its first use in media or who coined the term.

Phrases Opposite to Basket Case

A basket case doesn’t refer to a basket. It’s a way of someone that’s acting crazy. Using it to describe baskets or people that make baskets is incorrect.

You can use the expression “basket case” to describe someone mentally unstable. It also suits people with a flair for their personality but who don’t have a mental illness. For instance, if you have a friend that’s always doing extreme activities, like bungee jumping or skydiving, you could say they’re a basket case.

If someone you don’t know is acting erratically and being loud, you could say they’re a basket case. It’s more common for people to use the phrase to describe someone they know that has a wild side to them. You could also use it to describe strangers with wild behavior. For instance, a politician with a bad foreign policy that promotes war could be a basket case.