Are you about to head to a daytime party at the college campus? Before you head out, call your friends and invite them to the “darty.” This post unpacks the meaning and origin of this expression.

The expression “darty” means to go partying in the daytime. It’s a common word found on college campuses throughout America, and a “darty” could occur at a day venue on campus or at a frat house. If you tell a friend you’re going to a darty, you’re going to a day party.

Typically, the party will be on campus, but it could also occur at off-campus venues. For instance, Spring Break in Miami is the biggest “darty” of the year. If you’re going to a darty, you can expect it to be young people aged between 18 to 25, and most of them will be college students or recent graduates.

A darty usually involves day drinking of alcoholic beverages and wild behavior that can often get out of hand. Many campus frat houses and day party venues keep the party going into the night.

Darty is also a surname and the name of an electrical retailing business founded in 1957 in France.

“The summer’s coming, and you know what that means; darty season is almost here!”

“We’re all heading down to the lake this weekend for the biggest darty of the year. Are you going to join us or stay home?”

“Listen, you can join us, or we can kidnap you while you sleep. There’s no way you’re missing out on the darty of the year.”

“Is everyone ready to darty? Get a drink and hit the pool for some fun in the sun. Everyone’s having a good time, am I right?”

“Are you all ready to darty? It’s time to cut loose and get ready to raise the roof. Everyone put your hands in the air!”

“I love the summer. It’s just darty after darty, and no care in the world until the start of the next semester. Let’s go wild!” 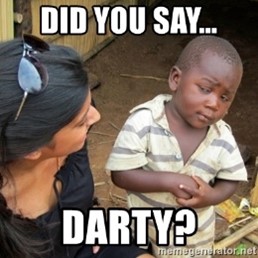 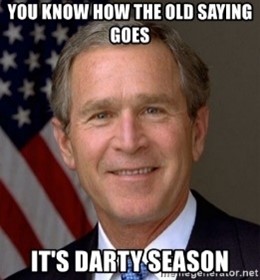 The expression “darty” originates from the college scene of the late 90s to early 2000s. The first mention of the saying in print is in the Urban Dictionary in 2006.

This titular portmanteau has been around American Campus life for at least two decades, and it’s still in use. People would say they were “going out” or “clubbing” to describe an evening’s entertainment in the nineties. In the early 2000s, these terms melded together, and people started to say they were going “partying.”

Experts believe “partying” entered the language to describe recreational drug use during the late 90s to 2000s. Day partying at campuses became more popular as concert and festival culture grew around this time.

Phrases Opposite to Darty

Don’t confuse the expression “darty” with the action of fast, erratic behavior. If someone is “darting” around the room or the road, they are making very short bursts of acceleration or quick shifts in direction. The phrase has nothing to do with body movements other than dancing at a party.

You can use “darty” when telling people that you’re attending or organizing a day party. If the event happens during the day and there’s alcohol, dancing, and people involved, it’s a “darty.” This expression is common on college campuses across the United States. Students will use it to describe taking a day off to party, usually in the summer.

The expression “darty” only suits social use, and you wouldn’t use it at work, or your boss might fire you. The phrase is a youthful saying, and most people using the expression will be in college or under the age of 30. People older than 30 that day drink or party during the day may have issues with alcoholism or substance abuse.