Are you feeling nervous in the days leading up to your wedding? Maybe you’re suddenly feeling hesitant about a business deal? You could say you’re getting “cold feet” with the situation. This post unpacks the meaning and origin of this expression.

“I don’t know if the wedding will happen this weekend. From what I hear, the bride has cold feet, and her friends say she’s ready to pull a runner.”

“I don’t know why you’re getting cold feet with this deal. We’ve been over the due diligence a hundred times, and it’s airtight.”

“What a time for him to get cold feet. He reaches the top of the slide, and now everyone’s waiting while he tries to man up.”

“I’m starting to get cold feet on this whole timeshare deal; it seems like a bit of a con job if you ask me.”

“Don’t get cold feet and panic sell now, Rob; we’ve been stacking crypto for years, and the market will turn around.” 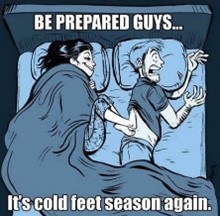 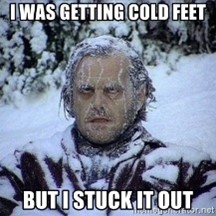 Ben Jonson gets the credit for creating the origin of this expression, where it appears in his 1605 play “Volpone.”

“Let me tell you: I am not, as your Lombard proverb saith, cold on my feet; or content to part with my commodities at a cheaper rate than I am accustomed.”

In this context, the saying means to be broke or to have no money.

The earliest use of “cold feet” in the current meaning and context of the saying comes from poet and writer Stephen Crane. “Maggie: A Girl of the Streets,” published in 1896, has the saying as the following.

“I knew this was the way it would be. They got cold feet.”

The phrase spread to college campuses throughout the US in the early 1900s, and people would use the expression “cold-footer” to describe men that were afraid to go to war in WWI. Another possible military origin of the saying comes from soldiers who endured frostbite in the war, making them unable to go into battle.

In 1912, J. F. L. Raschen translated a novel by Fritz Reuter published in 1862, where the phrase appears to have an origin in gambling. A winning card player who thinks he is starting to test his luck will leave the card table with “cold feet.”

Phrases Opposite to Cold Feet

The idiomatic version of the expression means to withdraw in a state of uncertainty about an outcome. However, it’s also a common theme in memes describing women placing their cold feet on their partner’s back while in bed.

The literal use of the saying is more common in media, but the idiomatic use of the expression is still very common in modern language.

You can use “cold feet” to describe fading temperament towards a positive outcome. The saying suits situations of hesitancy, uncertainty, or fear.

For instance, a groom that cancels the marriage over the fear of commitment would have cold feet. The salesperson that refuses to get on the phone may have cold feet.