Are you looking for a way to describe a movie or book you read as mentally stimulating? If so, you could say it gave you “food for thought.” This post unpacks the meaning and origin of this expression.

The expression “food for thought” refers to newly acquired information that makes you stop and think. The “food” in the saying is an idea or subject arising from an event, situation, or stimulus from a third party.

If you tell someone that a film gave you “food for thought,” you’re telling them that it was an interesting movie, and you recommend it to them. The saying also refers to new information you find interesting, and you want to discuss the subject matter with others.

The saying can also mean that you’re looking for a new method of doing something after receiving inspiration to “think outside of the box.” You may ponder the idea and work it around for several days before finding innovation in your thoughts.

“I was in the management meeting today, and they brought in an expert in relationship management. What she said gelled with me and gave me plenty of food for thought.”

“This video is food for thought about the ongoing climate crisis. It gives you plenty to think about but few solutions.”

“This post serves as food for thought for anyone that thinks they can get away with influencer crypto scams.”

“I visit this website every day for creative inspiration. It gives me so much food for thought about how to approach my work.”

“That speaker was incredible. They gave us real food for thought about how to approach investing.”

“That nature documentary was food for thought. I never knew that the ocean had so much plastic in it; it’s disgusting.”

“That book was amazing food for thought. It was a whirlwind of mental stimulation that really got me thinking.” 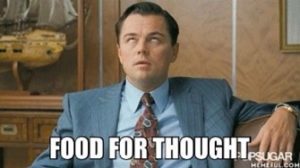 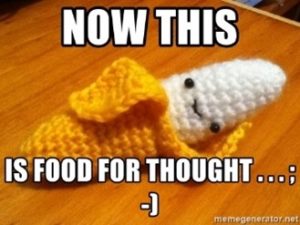 The origin of the saying “food for thought” comes from the author, Robert Southey. Southey’s book, “A Tale of Paraguay,” was described by the author as “A lively tale, and fraught with food for thought.”

It’s unclear when the saying started to gain traction in modern language. However, the phrase does appear in the “The Dictionary of Cliches by James Rogers,” published by Ballantine Books, in 1985.

Phrases Similar to Food for Thought

Phrases Opposite to Food for Thought

The saying has nothing to do with nourishment from food. Instead, the “food” in the phrase refers to new knowledge or information received. The information stimulates your thinking, not your stomach.

Therefore, using the saying to describe nootropic supplements providing nourishment for your thinking would be incorrect. Using the phrase to express ideas that are only of fleeting interest would also be the improper use of the saying.

You can use “food for thought” in social and professional situations. At home, watching your kids arrange their toys could give you food for thought for a new organizational product idea. At work, listening to a client give you their thoughts on the investment climate provides food for thought about what to expect from the market in the future.

When you’re looking to gain further insight from recently acquired knowledge, you’ll use the saying. The saying means that you find what someone said or wrote interesting, and you believe that the concept is worth thinking about because it adds some sort of benefit to your life.