Are you looking for a way to tell someone to stop feeling sorry for themselves or their regrets? If so, you could say “don’t cry over spilled milk” to get them to move past their frustration. This post unpacks the meaning and origin of this expression.

The expression “don’t cry over spilled milk” means don’t wallow in sorrow or frustration over past events.

Hindsight is always 20/20, and there is no point obsessing over things that happen in the past. We can’t control the past, and we can’t change it, so thinking and dwelling on past mistakes are pointless.

“Don’t cry over spilled milk” tells someone that they need to focus on the future and forget about the past.

Wallowing in guilt or self-pity won’t get you anywhere and may damage your mental health and attitude. When you say “don’t cry over spilled milk,” you’re telling the person to cheer up and face the future.

“Don’t cry over spilled milk, Cathy. It’s not your fault your hedge fund lost 95% of its inflows from bad stock picks; you’ll make a comeback.”

“I felt sorry for leaving that guy at the bus stop. Don’t cry over spilled milk, I guess. I didn’t want him in the car with me anyway.”

“Don’t cry over spilled Milk, Arianna. There’s nothing you can do to change the situation. Just let it go and move on with your life.”

“Why are you still fuming over that? Don’t cry over spilled milk; there’s nothing you can do about it.”

“I know you’re still angry about how things went, but don’t cry over spoiled milk. You’ll get them next time.”

“There’s no sense in crying over spilled milk. Pick yourself up and move on with things.”

“Crying over spilled milk never did anyone any good. Get over the loss and move forward, or you’ll get stuck in the mud.” 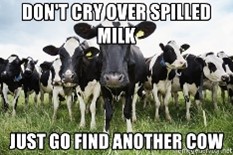 This expression has disputed origins. Language experts believe there are two possible origin stories for the saying. The first involves a book, published in 1888, telling the tale of a man who was the victim of a robbery. Despite the unfavorable outcome, the man says, “It was no use, however, crying over spilt milk.”

The second origin story for this expression comes from author James Howell, who wrote “Paramoigraphy” in 1659, where he wrote the saying “No weeping for shed milk.”

Phrases Opposite to Don’t Cry over Spilled Milk

The phrase has nothing to do with spilling milk or crying. In this case, crying is a response to a feeling of negative emotion, and the crying in this idiom is a person complaining about an outcome they didn’t expect.

You can use the phrase, “don’t cry over spilled milk,” when telling someone to let go of the past and move on with their life. The person might be stewing in guilt, living in fear, or feeling angry at someone or something.

The expression serves as a way to tell them to calm down and let the situation go. There is nothing they can do to change the past, and they need to handle the outcome, even if it wasn’t their fault.

The phrase suits professional and social use. Use it at the office to tell a colleague to stop beating themselves up about losing a sale. Use it at home to tell your kids to stop complaining about losing their favorite toy at the park.