Are you staring at a girl in the gym with a perfectly rounded set of voluptuous buttocks? You could say that she has a hot “badonkadonk” to describe her booty. This post unpacks the meaning and origin of this expression.

The expression “badonkadonk” means a girl’s “booty,” referring to her buttocks. She typically has a “thicc” rear end, with voluptuous curves and toned legs, with no cellulite.

Having a “bubble butt” became a trendy fitness and aesthetic goal for women after 2013, and it’s the subject of many internet memes.

If a girl has a “badonkadonk,” she has a round, shapely rear end. It’s a common street slang term used in the hip hop and college community. It’s also a popular term for describing a girl’s booty on social media.

Typically, the booty will belong to an attractive girl, and they usually spend a lot of time working out in the gym. They use exercises like squats to build their booty to such huge proportions.

“Wow, look at that girl. She has the Badonkadonk that I need in my life. I’m gonna go over there and talk to her.”

“Girl, you got that Badonkadonk that don’t quit. I’m all over you like a bee on a honey hive. Turn around and let me see that azz.”

“I’ve seen that girl at the gym. She squats like 200. Her legs are so hot, and her Badonkadonk is another level.”

“I love going to the gym and seeing all the honey’s in their yoga pants doing squats. Some of the badonkadonks I see on the daily would make you cry.”

“That’s some badonkadonk you got there, girl. How about you and me go somewhere for a cup of coffee?”

“Girl, with a badonkadonk like that, I hate to see you go, but I love to watch you leave.”

“Shake that badonkadonk, girl. You know you got dat azz that deserves a good twerking; show us what you got.”

“That stripper has some badonkadonk on her. I wonder if she’s available for a private dance in the champagne room?” 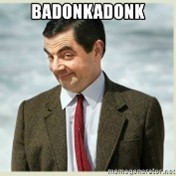 The expression “badonkadonk” originates from cowboy culture in the southern United States. The first entry of the saying in the Urban Dictionary comes from 2003. However, experts believe it was in use in the late 1990s in southern rural communities in the United States.

The phrase “badonkadonk” appeared in memes on the internet in 2002, shortly before the first entry into the Urban Dictionary. The use of the meme spread through the years, and it entered mainstream culture in music and TV shows by the 2010s.

The real breakthrough in the popularization of the phrase comes in 2005, when Trace Adkins released the single “Honky Tonk Badonkadonk” in late October. The country song earned global acclaim, and spawned many remixes, including one for the soundtrack to the X-Files.

The 2010s saw a rise in the popularity of girls training their glutes to gain a large, curvy pair of buttocks. The meme would start to feature on Instagram in 2013, and it’s a common video topic on platforms like Tik Tok.

Phrases Opposite to Badonkadonk

It’s common for people to confuse this saying with a sound. However, it has nothing t do with the noise produced by something falling or tumbling. It’s a way of describing someone’s curvy, voluptuous buttocks.

You can use the phrase “Badonkadonk” in social settings when you what to admire someone’s buttocks. Typically, you’re referring to a woman with a curvy bottom. However, the phrase can also apply to your buttocks, or other people that don’t have full, curvy features.

You could call an attractive girl’s rear end a “Badonkadonk” when you’re out at a bar with friends. A Badonkadonk is a colloquial term, and it’s street slang that you’ll use when talking with friends. It doesn’t suit professional use.