Are you looking for a word to describe a well-built guy? If so, you could use “brolic” to describe their impressive body. This post unpacks the meaning and origin of this expression.

The meaning of the term “brolic” is a description of a well-built man. The person should have all the Men’s Health cover model features. They need a lean frame with visible abs, plenty of muscle, and loads of vascularity.

It references comic and anime characters, like those from the TV show Dragonball Z. These characters morph into “Super Saiyan” beings with ripped, muscular physiques. The phrase is part of “bro culture,” It refers to guys that obviously spend a lot of time in the gym.

A brolic priorities his diet and training, and everything else is secondary. A brolic can also have a somewhat dry and boring personality, and all they do is talk about fitness-related topics. Other experts suggest that a brolic is a vain person and always looking at themselves in the mirror. They may also wear gym attire, such as a stringer tank top, that shows off their body.

“Joe is becoming such a brolic. The guy is always at the gym, and he carries his meals with him everywhere he goes. That’s too much commitment to looking good, and it’s probably not healthy.”

“Man, you’re such a brolic. All you do is eat boiled chicken breast and rice and work out. Don’t you ever get time to just cut loose and enjoy yourself?”

“Being a brolic is hard work. It takes hours of dedication to the gym and your diet. You also have to endure plenty of ridicule from people that don’t understand the lifestyle.”

“You’re such a brolic. While everyone else is having a beer, you’re cracking open a protein shake. That’s just anti-social and pathetic.”

“Look at that brolic over there hitting the bench press. He looks like a gorilla, but I bet it’s all steroids.”

“Brolic’s will do whatever it takes to see themselves look good in the mirror. They’re willing to give up on their relationships and jobs if it interferes with the gym.” 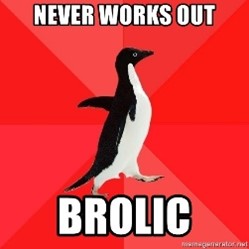 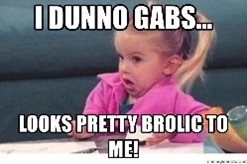 The term “brolic” originates from hip-hop culture in the 1990s. The late Cristopher Wallace, aka “The Notorious B.I.G,” was the first rapper to use the term in a song, where it appeared in his 1997 track, “Long Kiss Good Night.”

The infamous hip hop supergroup, “The Wu-Tang Clan,” would also use the word in the title of one of their tracks, “Brolic Mode,” released in 1998. Over the coming years, many other rappers, from Jay-Z to Nas, would use the term in their lyrics.

The phrase officially appeared in the Urban Dictionary in 2003, some five years after its coining in street language.

The phrase has nothing to do with broccoli. While bodybuilders and fitness enthusiasts rely on this cruciferous vegetable as a big part of their diet, it’s not the phrase’s meaning. Brolic refers to a guy in a muscular state. Some people may use it to describe females that compete in bodybuilding and have a masculine look.

You can use the term “brolic” when referring to a well-built man. The person has a sculpted look that’s muscular and lean, with the typical “Men’s Health” cover look. They will have visible abs, powerful arms, chest and back, and good looks. This is a slang term suiting social use only.

If you’re at the gym and see a person fitting this description, you could turn to your friend and say that the guy looks “brolic.” Or you could say you feel “brolic” After spending a few months of regular workouts at the gym, and you’re starting to see results.