Are you heading to the gym and want to let someone know that you’re going to train at your peak? You could tell them that you’re “going HAM,” and you’re going to set a new personal record with your workout. This post unpacks the meaning and origin of this expression.

The expression “going HAM” means you’re going as “Hard as a Motherf**ker.” It’s a way of telling people that you will give a task or activity your maximum effort and hold nothing back. Going HAM can apply to various activities, from eating to working out or completing work.

If you “go HAM,” you go “all-in,” and you push aside all doubts and obstacles to achieve success, no matter the cost. Going HAM means that you adopt a fearless approach to a task or activity, and you give it everything you have to succeed against the odds.

“I’m about to hit the gym, and I’m going HAM tonight. This new preworkout is kicking in, and I’m ready to tear the weights apart.”

“I’m worried about Andrew. He’s been going HAM on the booze lately, and I think he might have a problem.”

“We were at the club the other night, and we were going HAM on the dancefloor. All the guys were scoping us out, and we were the stars of the place.”

“Are you ready”? We’re going HAM with this. I want everyone to give their best effort and leave nothing on the table.”

“Dang, man, your sister is going HAM lately with all the dating? Is she in demand or what? IT seems like every guy in the town wants to get with her.”

“We’re going HAM at the buffet. I haven’t eaten all day. I’ve been thinking about that all-you-can-eat pizza since lunchtime.”

“Man, that guy was going HAM on the poor manager. I feel for those guys and how they have to take such abuse from angry customers.” 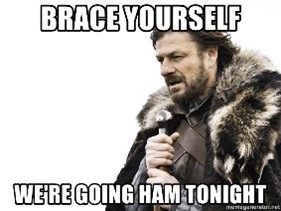 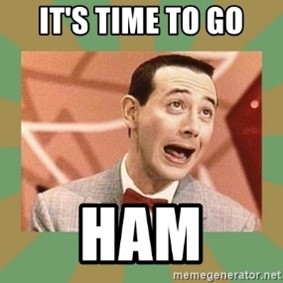 The expression “going HAM” originates from hip-hop culture. Language experts attribute the use of the term to the title of the track “HAM,” released by rappers Kanye West and Jay Z. The rappers explain the meaning of the acronym HAM in the track, and it experienced quick integration into mainstream culture.

Jay Z and Kanye West are two of the biggest rappers in the world and two of the richest men in hip hop. People like to follow them and adopt the sayings and cultural nuances they introduce into hip-hop culture.

So, it wasn’t long before hip-hop heads were telling everyone they were “going HAM.” The track was released in 2011, and “going HAM” was already a saying by them. However, language experts believe the hip-hop duo is responsible for popularizing the term.

Phrases Opposite to Going HAM

You can use the expression “going HAM” when you want to let people know that you gave a task or action your best effort. It’s saying that you were giving something your all for a sustained period. The phrase suits professional and social use. You could tell the manager that you’re about to go HAM with consolidating the client accounts to show them you’re working hard.

You could use it with your friends to describe how you were tearing it up at the gym and going HAM on the deadlifts last night. The phrase “going HAM” suits situations where you want to impress upon others that you were performing at your peak.