Are you looking for a way to tell people to clean up their diet? If so, you could tell them, “you are what you eat.” This post unpacks the meaning and origin of this expression.

The meaning of the expression “you are what you eat” is that our lifestyle and diet choices impact our health and well-being. You are what you eat defines your health status, and if you’re feeling sick or dealing with chronic health issues, your diet is usually to blame for your current problems.

So, you are what you eat means that you only feel as good as the energy and food you put into your body. Living an unhealthy lifestyle will eventually catch up with you.

“Look at that guy there in line at the burger stand. He must weigh 500-lbs. I guess you are what you eat, and he needs medical help, not a burger.”

“He went into surgery for a triple bypass. The doctor said it was likely from poor dietary choices over his lifetime. Oh well, I guess you are what you eat.”

“That girl looks so young despite her age. She says she’s a vegan and fasts regularly. You are what you eat, and it looks like that’s working for her.”

“You are what you eat, so stop going overboard on the sugar and saturated fat. You’ll end up with heart disease and hypertension.”

“Don loves chicken; it’s his favorite fast food. That’s why he ran away from the fight the other night. You are what you eat, hey Don?” 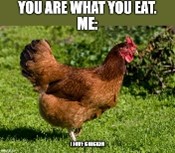 The expression ” You are what you eat” comes from French lawyer Anthelme Brillat-Savarin. He coined the term in 1826 in his writings, “Physiologie du Gout, ou Meditations de Gastronomie Transcendante,” where it appears like the following.

“Dis-Moi ce que tu manges, je te dirai ce que tu es.” (Translation: Tell me what you eat, and I’ll tell you what you are).

However, the earliest example of the phrase in print comes from the Bridgeport Telegraph in 1923 in a beef advert for the company “United Meet Markets,” where it appears as follows.

“Ninety percent of the diseases known to man are caused by cheap foodstuffs. You are what you eat.”

The modern version of the saying first appeared in English in the early 1930s. American nutritionist Victor Lindlahr believed that our food determines our health status. He was one of the first “diet gurus,” creating his method known as the “Catabolic Diet” in 1942.

Phrases Similar to You Are What You Eat

Phrases Opposite to You Are What You Eat

Ways People May Say You Are What You Eat Incorrectly

The phrase “you are what you eat” doesn’t mean that you take on the physical characteristics of the things you eat. For instance, if you eat a plant-based diet, you are not going to magically transform into a vegetable. The saying means that your lifestyle choices play a role in determining your health.

Acceptable Ways to Phrase You Are What You Eat

You can use “you are what you eat” when referencing someone’s diet and how it impacts physical health and well-being.

It suits both negative and positive connotations. For instance, if someone is overweight and has poor health, an examination of their diet would likely reveal they ate poorly.