Are you reading through a list of specifications? If you want to skip over the details, you can use the phrase “yada yada yada.” This post unpacks the meaning and origin of this expression.

You’ll use “yada yada yada” in replacement for other sayings like “whatever” or “blah blah blah.” It’s an expression meaning that you’re skipping over irrelevant details that no one cares about or needs to know.

Suppose you’re saying it in response to someone’s speech or what they say to you in a conversation. In that case, they will usually take it as a disparaging response. It shows them that what they are saying is repetitive, predictable, or tedious.

It’s a versatile saying, and you can use it to embarrass someone or to keep a conversation flowing to avoid losing people’s attention.

“So next we have all the details on the specifications, yada yada yada, I think we can skip to the conclusion and wrap this up.”

“All I hear coming out of your mouth is yada yada yada. Tell me something I don’t know, or I’m leaving.”

“So we went to the coast for a holiday and did all the attractions and yada yada yada. It was a fun week.”

“Yada yada yada, nothing is going on here right now, and we’ve heard this presentation before.”

“Oh my gosh, will this guy ever stop? He’s so boring, it’s just yada yada yada, and it feels like its never going to end.” 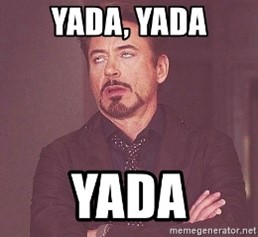 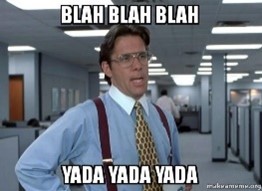 The origin of the expression, “yada yada yada,” comes from an adaptation of the older saying “blah blah blah.” “Blah blah blah,” is a British saying originating from the early 1900s, and the American equivalent of “yada yada yada emerged in the US shortly after WWII.

Over the decades, the phrase went through several versions, including variations like “yatata, yatata,” “yaddega, yaddega,” and others. One of the earliest uses of a variation in print comes from the Long Beach Independent in August 1948, where it appears as follows.

“Yada yada “Yatata … yatata … the talk is all about Chatterbox, Knox’s own little Tomboy Cap with the young, young come-on look!”

It makes sense that “yada” ended up as the predominant version. The English language tends to gravitate to the shortest version possible. The first appearance of “yada yada yada” comes from the 1970s.

Comedian Lenny Bruce would also use the saying in his special, “Essential Lenny Bruce,” airing in 1967, where it appears as follows.

Phrases Opposite to Yada Yada Yada

Some people may say “yada yada yada” incorrectly by using only one “yada” in the sentence. You’ll need at least two “yadas” as in, “yada yada,” to have it make sense to the other person.

You can use the phrase “yada yada yada” in social and professional settings. Typically, the phrase is a replacement for “blah blah blah,” but with less of an insulting tone.

You could use the phrase to skip over irrelevant details in a speech or when talking about current events that everyone knows and no one cares about.