Did your friend just do something silly? If so, you could use the reactive response, “what a maroon,” to describe their behavior. This post unpacks the meaning and origin of this expression.

The expression “what a maroon” means “what a moron.” It’s an insult to someone’s intelligence and a way of telling them that they are not worth talking to in a conversation because you are above them.

You’ll usually be using this phrase when referring to other people’s behavior, but you can use it to describe a time when you were acting like a moron.

For instance, you could tell someone that you were acting like a maroon when you were driving drunk the other night.

In most cases, you’re using the expression as a minor insult and not serious defamation of someone’s character. For instance, if your friend jumps off the roof and sprains their ankle, you could laugh at the schadenfreude and say, “what a maroon.”

“Look at Alex over there acting like a fool in front of all of those people. What a maroon!”

“Can you believe what that guy just said? He thinks that NASA never went to the moon. What a maroon!”

“Franny thought she could get the liquor into the concert if she poured it in her water bottle. What a maroon, she doesn’t realize security won’t let her take any bottle inside the stadium.”

“What a maroon, that guy over there just told me that this inflation is happening because of the Federal Reserve’s monetary policy. It’s clearly because of geopolitical tensions.”

“Oh my gosh, what a maroon! He didn’t see the clear glass sliding door and ran into it at full speed. He’s lucky he didn’t break his neck.” 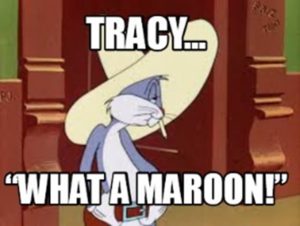 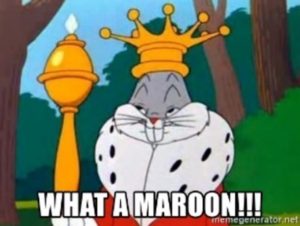 The origin of the expression “what a maroon!” comes from the legendary Warner Bros. cartoon series, “Looney Tunes.” Bugs Bunny is an American icon, captivating the hearts and minds of American youth since the 1930s.

During the 30s, people would refrain from using offensive language in public. Back then, saying swear words was highly frowned upon, and language was more proper than it is today. Bugs coined the expression “what a maroon” in one of the early episodes of the cartoon.

The hunter, Elmer Fudd, is searching for rabbits and comes across Bugs. After distracting him and sending him away, Bugs says, “what a maroon!” The saying became Bugs catchphrase throughout the Looney Toons series.

You don’t hear people using the expression every often today. Media changed a lot over the last 90 years, and now our language is a lot more colloquial. Using words like a moron, while not culturally acceptable, are barely a second thought to most people.

Phrases Similar to What a Maroon

Phrases Opposite to What a Maroon

Ways People May Say What a Maroon Incorrectly

Some people may use the expression as a harsh insult but find it doesn’t have much impact. In fact, it may end up making you look like an idiot. “What a maroon” only suits lighthearted social use. There would be little use for it in professional situations and conversations.

Acceptable Ways to Phrase What a Maroon

You can use the phrase “what a maroon” when you’re describing another person as an idiot or “moron.” The expression is somewhat ironic since spelling “moron” as “maroon” is unintelligent.

However, the phrase suits lighthearted conversation between friends when you’re mocking their actions or decisions. It’s usually not said with any ill intention, but as a way to tell friends that you find their actions or words amusing and silly.