Being “down bad” can also mean that someone is feeling depressed about their life and having a hard time coping with their mental health.

“Have you seen Reggie lately” He’s down bad. A week ago, he broke up with his girl because he caught her cheating. Now he won’t leave the house.”

“I’m down bad for that guy. I wish I was with him, and it’s all I can think about every day. I feel like I’m going nuts because I want him so bad.”

“I’m down bad in life right now. Everything just keeps going wrong, and I don’t know if I’m ever going to get things to come right for me.”

“We’re all down bad right now, but have faith. Sooner or later, things will turn a corner, and we’ll be back on top, you’ll see.”

“I’m down bad right now. It’s the end of the shoe, and I’ve lost over five thousand dollars in around 30 hands. This is a career-defining loss.”

“I’m down bad right now. I’m feeling so depressed that the doctor gave me Xanax to calm down. I told him what I really needed was to get laid. But he couldn’t help me with that.” 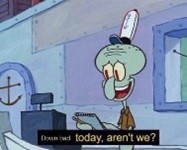 The expression “down bad” originates from the late 1990s to the early 2000s. It started as a way to say that you were not doing well in life and experienced some sort of hardship, usually financially. The term expanded in the 2000s, and more people started using it to describe feelings of being lovesick after a breakup.

Phrases Similar to Down Bad

Phrases Opposite to Down Bad

The phrase doesn’t mean that you’re going down in a plane or another vehicle. It means that you’re having a hard time due to the im0pact of relationships or events in your life.

Acceptable Ways to Phrase Down Bad

You can use the expression “down bad” when you want to say a friend is feeling lovesick for his crush. You could also use it after a friend experiences a breakup with their partner. It’s a way of saying that the other person isn’t in their normal state of mind, and it’s best to avoid them right now.

You can use the expression in social situations where you speak to other people. They might be inquiring about why they haven’t seen you in a while, and you could say you were “down bad” with the breakup, and you couldn’t face the world until now.

The phrase can also apply to situations in life where you get ill and “go down bad” for days because of the severity of the illness. It can also mean that you lose your status in life or go broke.