Are you looking for a way to tell someone that you’re reached your limit and won’t help them any further? If that’s the case, you could say you will “draw the line” here, and they are on their own with their endeavors. This post unpacks the meaning and origin of this expression.

The meaning of the expression “draw the line” is to limit a person’s participation or contributions to an event or task. It’s a way of telling someone that you have reached the threshold of your limitations and you are not prepared to go any further to assist them.

It can also refer to setting boundaries with people to temper their expectations. For example, you could tell someone that you will draw the line at any physical violence occurring at the protest.

It’s also a way of separating responsibilities or accountability for a task. If you tell someone that you draw the line, you’re referring to not being responsible for any outcome after this point. It can also refer to accepting, recognizing, or admitting the difference between tasks, people, objects, or ideas.

“Mark, I’m afraid I’m going to have to draw the line on this. This task is outside of my expertise, and I’m not comfortable moving forward with it anymore.”

“I draw the line with this; there’s no way you can convince me to go any further.”

“This is where I draw the line, Tom. If things go bad for you, I’m not responsible for the outcome.”

“I draw the line here, Mike. I’m not subjugating myself to any more of this. You’ve had your fun. Just let it go.”

“We draw the line on this, and that’s it for us. There’s no going back. When you’re gone, you’re gone.”

“It’s time to draw the line. I know you expect more from me, but there is a limitation to what I’m willing to give you on this.”

“This is where I draw the line on this project. If you guys want to go ahead and take the risk, that’s fine. However, don’t expect me to stick my neck out for you when it goes wrong.” 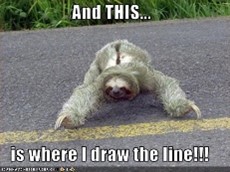 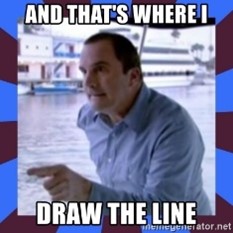 The origin of the expression “draw the line” comes from the sport of tennis. Cricket and tennis were the two most popular sports in England in the 1700s. When tennis first arrived on the shores of England from France some four hundred years earlier, the rules of the game were still unclear.

Many players were unsure of the correct court dimensions. As a result, they would “draw a line” in the sand to form to boundaries of the court.

Some language experts think that the expression comes from the task of plowing a field. The plowhorse would cut a line across the field, indicating the boundaries of the farmer’s land in 1700s England.

The saying may also derive from early prizefighting contests, where the referee would draw the line for the boundaries of the match.

Phrases Similar to Draw the Line

Phrases Opposite to Draw the Line

Using “draw the line” to refer to the action of physically drawing a line is incorrect. The “line” in the expression refers to a threshold you’re not willing to pass with your thoughts or actions. Using it to describe artwork is incorrect.

You can use the expression “draw the line” when telling someone that you refuse to go any further with your actions or intentions. The saying suits social and professional use.

You can use it at work to tell a manager you’re unwilling to work outside of your job description. You could use it at home to tell your partner that you’re no longer willing to entertain their thoughts or actions.