Are you looking for a way to express a competition that’s too close to call the winner? You could say that it’s coming “down to the wire” for the competitors. This post unpacks the meaning and origin of this expression.

The meaning of “down to the wire” suggests that there will be an outcome only clearly available after witnessing the end.

It usually refers to competition between two or more parties, with the result being too close to call. It can refer to competitions like sports events or life events, like competing for a promotion at work.

“The presidential race is coming down to the wire this year. The polls have both candidates battling it head to head for the lead.”

“This new management position is coming down to the wire in a faceoff between John and Mike. It’s too close to call right now.”

“This will go down to the wire; things are neck-and-neck between the two companies bidding for the contract.”

“This tournament is going down to the wire. Will the Blackhawks or the Red Wingers take home the Stanley Cup in Game 7?”

“We’re going down to the wire with this. Will the contestants finish the course before the buzzer? Or are they going home with their tails between their legs?”

“Old Betsy and Charlemagne are coming down the straight neck-and-neck for the lead. This race is going down to the wire and we’re going to need a photo-finish to determine the victor.” 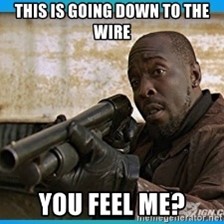 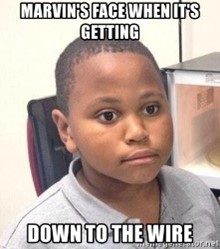 The expression “down to the wire” originates from horse racing in the late 1800s. It was common for horse races to end in dramatic finishes where the winner would “win by a nose.”

With gambling on the horses being big business, event organizers would draw a wire across the finish line to assess which horse finished first in a close contest. As the jockeys and their animals approached the finish line, commentators would say they were coming “down to the wire.”

The earliest written record of the expression comes from Scribner’s Magazine, in the story “How the Derby was Won,” published in July 1889.

“As the end of the stand was reached Timarch worked up to Petrel, and the two raced down to the wire, cheered on by the applause of the spectators.”

There is another claim that the expression originates from Australia, where it appears in the Australian newspaper “The Southern Argus” in June 1884 as the following.

“There was a terrific race round the, turn and down to the wire, Soprano, staying the longest, and winning by a neck, amidst uproarious applause.”

Phrases Similar to Down to the Wire

Phrases Opposite to Down to the Wire

Ways People May Say Down to the Wire Incorrectly

The phrase has nothing to do with wires. In this case, the “wire” is the finish line. Using the expression to explain that there is a physical race that comes down to the wire would be incorrect.

Acceptable Ways to Phrase Down to the Wire

You can use the expression “down to the wire” when you call an event where the competitors are in a race for a close finish. It’s a similar saying to “too close to call” and a way to tell people that the competition is tight, and the winner or the outcome of the event or process will only be announced at the finish.

The saying suits social and professional use. You could use it at work to describe the race for the new manager position that will come down to the wire between two employees. You could use it at home to tell your partner that the finale of the TV series you’re watching is coming to a head in the last episode.