Are you looking for a way to describe a friend falling deeply in love? If so, you could say she is “head over heels” in love with her partner. This post unpacks the meaning and origin of this expression.

The expression “head over heels” means that you are excited and thrilled with aspects of your life. Typically, the saying applies to the emotion of being in love with someone to the extent of being smitten over them.

For instance, if you are in a new relationship and think about your partner all the time during the day, you are “head over heels” in love with them.

While the phrase is commonly used to describe love for someone else, it can also represent the physical act of falling head over heels.

“I met this guy at the bar on the weekend, and we hit it off so well. I normally don’t date guys I meet in bars, but I’m head over heels for him.”

“Thanks for installing this new CRM system, boss; I’m head over heels for it. The additional functionality it brings to my job saves me at least an hour every day.”

“I’m head over heels for fried cauliflower in sweet chili sauce. It’s just amazing; I think I could eat it every day.”

“I’m head over heels for this girl at work. She has me wrapped around her thumb.”

“I have to say I’m head over heels for this new Haagen-Daze flavor; it’s the business.” 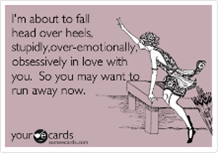 The origin of the expression “head over heels” comes from Herbert Lawrence’s book, “Contemplative Man,” published in 1771. The saying appears as follows.

“He gave such a violent involuntary kick in the Face, as drove him head over heels.”

The original use of the saying referred to the physical action of going head over heels, ending in an injury to the person. However, the more modern use of the expression refers to falling in love.

The first use of the saying as a reference to love comes from Indiana newspaper, “The Lebanon Patriot,” in 1833. The style of writing and the lack of parenthesis explaining the meaning of the expression suggests that “head over heels” was already common in everyday conversation across America by this date.

“About ten years ago, Lotta fell head over heels in love with a young Philadelphian of excellent family.”

The Ballyshannon Herald, an Irish newspaper, produced a similar reference in 1832.

“Michael Croker… swore that he was overhead and heels in love with her.”

Phrases Similar to Head over Heels

Phrases Opposite to Head over Heels

Some people may use the phrase to describe the physical action of falling head over heels. For instance, a football player might receive a tackle in a game and go head over heels on the turf.

However, the phrase is more common in situations describing an emotional state, not a physical action. It’s also common for people to misspell “heels” as “heals.”

You can use “head over heels” when describing reckless actions without thought of consequence. The phrase could explain your actions or those of others, depending on the context of the situation. The term suits professional and social use.