Did your friend just get in an argument with you, and you’re ready to go to war with them over your principles? If that’s the case, you could say you’re “going to the mattresses” to win the argument. This post unpacks the meaning and origin of this expression.

If you’re “going to the mattresses,” it means that you’re preparing for a war-like stance or belligerent behavior. It can refer to something trivial like arguing with the neighbor or something as serious as a gang war.

“Can you believe John? He’s ready to go to the mattresses with the neighbors over their dog pooping in his yard.”

“The teachers were ready to go to the mattresses after hearing the state education department announcement.”

“The phone company keeps double charging me and not replying to my emails. I’m ready to go to the mattresses with these people if they don’t shape up.”

“It doesn’t matter if they try to take advantage of you, Jill; we’re all prepared to go to the mattresses for you if this becomes an issue.”

“My brother just won’t see eye to eye with me on anything. Now, he’s willing to go to the mattresses over our father’s estate; it’s just unbelievable.” 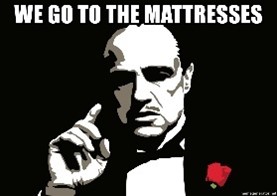 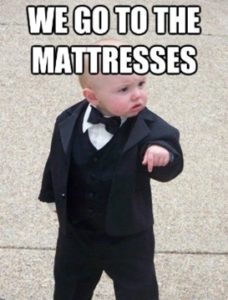 The origin of the expression “go to the mattresses” comes from the Italian practice of hiding valuable under the mattress in war times. During the First and Second World Wars, Italians would withdraw their currency from the bank, creating “bank runs.”

Since banks do not hold all the cash on hand to settle all account withdrawals, people would find themselves without access to money. As a result, people would withdraw their savings and hide the cash under the mattress. They would then use these savings during the war to feed their families. So, when they needed to buy groceries, they would “go to the mattresses.”

The phrase first appeared in the legendary trilogy, “The Godfather,” starring Marlon Brando, and later “The Sopranos,” starring the late James Gandolfini.

The expression appears in the Godfather movie as follows.

Clemenza: “That Sonny’s runnin’ wild. He’s thinking of going to the mattresses already.”

Sonny: “No, no, no! No more! Not this time, consiglieri. No more meetings, no more discussions, no more Sollozzo tricks. You give ’em one message: I want Sollozzo. If not, it’s all-out war: we go to the mattresses.”

Phrases Similar to Go to the Mattresses

Phrases Opposite to Go to the Mattresses

Ways People May Say Go to the Mattresses Incorrectly

Acceptable Ways to Phrase Go to the Mattresses

You can use the phrase “go to the mattresses” when you’re discussing the potential of having an argument or conflict with another person or organization. While the saying means preparing to go to war, the meaning of “war” in the average context of the phrase is simply a bad situation with other people.