Are you speaking to someone that looks down on their luck and needs some motivation? You could use the motivating statement “keep on truckin” to tell them to persist in the face of challenges. This post unpacks the meaning and origin of this expression.

The expression “keep on truckin” means that a person should persist in the face of adversity. Life may get challenging for us at some point, and we need to persist if we want to come out as a success on the other end.

It’s a motivating statement used to get people to persist with their strategy, even though it isn’t working for them. Typically, you’ll use the phrase when someone is depressed and feeling in a rut. By using “keep on truckin,” you tell them that brighter days lie ahead. However, they need to persist through the darkness to achieve their goals.

If you tell someone to “keep on truckin,” you’re telling them not to give up because they are almost at where they need to go.

“I know you’re down about how things are in life right now. But you got to keep on truckin, man. Sooner or later, you’re going to catch a break.”

“Keep on truckin, bro. That’s all I can tell you. Persistence pays off eventually, and you’ll find yourself in the right place at the right time sooner or later.”

“There’s no reason to go off the rails now. You’re doing so well. Keep on truckin, and you’ll finish your recovery faster than you think.”

“Keep on trucking, pal. Sometimes life gives us lemons, and all we can do is make lemonade.”

“It feels like the world is against me sometimes, and I want to give up. But I know I have to keep on truckin if I want to succeed.” 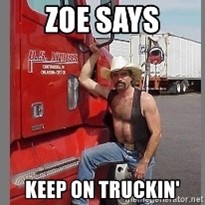 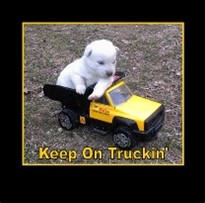 The expression “keep on truckin” originates from the trucking industry. Trucking is a non-stop business that operates in all weather conditions. Whether it’s snowing, sleeting, or thunderstorms, 18-wheelers are on the roads to make deliveries night and day.

Truckers are a persistent type of people. They keep going through all conditions to make their delivery on time. As a result, the persistence of the trucker led to the development of the expression “keep on truckin.”

The first appearance of the saying was in a song, published in 1936, named; “Truckin’ My Blues Away” by Blind Boy Fuller. Experts believe this song was the origin of the saying.

The oldest record of the expression in print goes to the Australian newspaper “The Herald.” The paper published an article in 1983, where the saying appears as follows.

“Keep on Truckin’ while you may.”

Phrases Similar to Keep on Truckin

Phrases Opposite to Keep on Truckin

Some people may use the phrase “keep on truckin” to motivate people already in a peak emotional state. While it’s not necessarily incorrect to use this expression in this manner, it’s better for situations where a person is less enthusiastic, and you’re telling them to persist.

You can use the phrase “keep on truckin” as a motivating statement to others. It suits professional and social use, usually when people feel down about life circumstances or feel that they are in a rut. You can use it at work to motivate an uninspired colleague into doing their job.

Or you could use it with your friends when they’re telling you about how they don’t enjoy life, but they’re wading their way through it. The statement has more to do with motivating people who are depressed or dispassionate than people in high emotional states.