Did your friend start dating someone you don’t find physically attractive? You could say ‘love is blind’ to describe their decision. This post unpacks the meaning and origin of this expression.

The expression ‘love is blind’ means that people in love don’t see the faults in each other. The emotions produced by their relationship overcome any physical or mental shortfalls the other person has. As a result, they can look past a person’s looks or behavior, accepting them for who they are.

‘Love is blind’ means you can look past the person’s imperfections because your love for them means you don’t care if they aren’t physically attractive or have character faults. You accept them for who they are.

“I don’t get how she can be with him. He’s old and ugly. I guess love is blind, and who are we to judge what she finds attractive in a partner.”

“Don’t you know that love is blind? It doesn’t matter what a person looks like on the outside. What matters is their mind, character, and behavior towards you.”

“I’m sure love must be blind. John’s new girlfriend is hideous. I don’t know how he can kiss that thing without throwing up.”

“I know that love is blind, but wow, your boyfriend looks like someone beat him with the ugly stick. You can do so much better than him, girl.”

“I don’t care what you think about my boyfriend. I think he’s handsome. Love is blind, and looks don’t matter to me anyway. He treats me right, and that’s why I’m with him.”

“Love is blind because it would run away in horror if it saw your girlfriend. Seriously, guy, she looks like the backside of a bulldog.”

“Love is blind, and I don’t care about that scar on your face. I appreciate what’s within you. Your heart and mind are what I find attractive about you.” 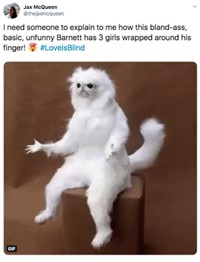 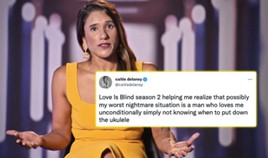 The expression ‘love is blind’ originates from the book ‘The Merchants Tale,’ written by Geoffrey Chaucer circa 1405. The term appears as follows.

“For loue is blynd alday and may nat see.”

While Chaucer coined the term, Shakespeare popularized it in language and culture. The playwright used the expression in several plays, including Henry V, the Two Gentlemen of Verona, and this example from The Merchant Of Venice, published in 1596, as follows.

“Here, catch this casket; it is worth the pains.

I am glad ’tis night, you do not look on me,

For I am much ashamed of my exchange:

But love is blind, and lovers cannot see

The pretty follies that themselves commit;

For if they could, Cupid himself would blush

To see me thus transformed to a boy.”

Phrases Similar to Love is Blind

Phrases Opposite to Love is Blind

The phrase ‘love is blind’ doesn’t refer to people being blinded by falling in love. The ‘blindness’ in the saying refers to a person’s ability to look past another person’s flaws in their looks or behavior. It has nothing to do with blinding people you love.

You can use the phrase ‘love is blind’ when discussing a love interest between yourself or other people. The term suits social interactions.

Or a friend might find your partner unattractive, but you don’t see their physical flaws due to love being blind. It’s a way of saying that the feelings and emotions created by being in love may change how you behave or think, causing you to do or say things out of character.