Did someone tell you you’re playing ‘blind man’s bluff’ with your life? This post unpacks the meaning and origin of this expression.

The expression ‘blind man’s bluff’ comes from a children’s game. While many kids still play the game, it’s fading in popularity as video games and the metaverse takes over kids’ entertainment. However, the saying has an idiomatic meaning.

If you play ‘blind man’s bluff,’ you’re taking a chance on something without rhyme or reason to your position. It’s a way of saying you’re taking a risk without any clue of knowing whether it will pay off.

“The kids are out in the yard playing ‘blind man’s bluff.’ It looks like they’re having plenty of fun. That game survived millennia, and it’s still so popular today.”

“I think you’re playing blind man’s bluff with this. You have no strategy, but you think you will succeed with it?”

“If you don’t know what you’re doing, you’re essentially playing blind man’s bluff with your savings. Rather invest into a stable asset than dump your money in the stock market.”

“I think you’re playing blind man’s bluff. You have no idea how that snake will react when you put your hand in the tank. If it bites you, you’ll lose an arm.”

“Playing blind man’s bluff in the boardroom is not how we do business around here. I want a comprehensive strategy and action plan, not pie in the sky.”

“If you don’t know what you’re doing, why take the chance? Playing blind man’s bluff with it will only get you so far.”

“Look, I’m tired of playing blind man’s bluff with you. Clearly, you don’t know what you’re talking about, and you have no clue how to resolve the situation.”

“Central banks are playing blind man’s bluff with inflation. They have no clue what they’re doing, and they’ll crash the global economy with their reckless monetary policy.” 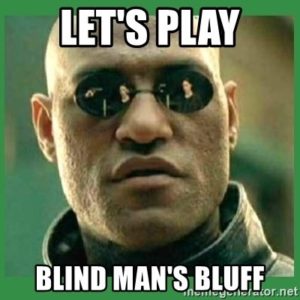 The expression ‘blind man’s bluff’ originates from the children’s game of the same name. The first use of the phrase in English comes from a play by Robert Wilson,’ Three Ladies of London,’ performed in 1590, where it appears as follows.

“Ile to my stall; Love, Lucre, Conscience, blindman bluffe to you all.”

An iteration of the phrase appears in the religious text ‘Serpent Salve,’ written in 1643 by John Bramhall.

“We goe to blind-man’s buffet one with another.”

It was common for English households to play the game during the Christmas period as a way to pass the time with the family. Samuel Pepys refers to the game in a diary entry dated Monday, 26th December 1664, where it appears as follows.

“…and so home to bed, where my people and wife innocently at cards very merry, and I to bed, leaving them to their sport and blindman’s bluff.”

Phrases Opposite to Blind Man’s Bluff

The phrase ‘blind man’s bluff’ doesn’t refer to bling people. If you are ‘blind’ in the sense of the expression, it means you’re inexperienced, or you have no plan of action. The ‘bluff’ describes an outcome you want to achieve without any strategy to get there.

You can use the expression ‘blind man’s bluff’ when discussing the children’s game of the same name. You can also use it in professional and social settings to describe someone taking a chance on something, despite having no predetermined outcome.

For instance, you could use ‘blind man’s bluff’ to describe someone saying their football team will win on the weekend, despite having no evidence to support6 their position. Or you could use it at work to describe a salesperson setting a huge daily target with no plan on how to achieve it.