Did your grandfather tell you he has a ‘bucket list’ he wants to complete before he dies? This post unpacks the meaning and origin of this expression.

The expression ‘bucket list’ refers to a list of items you want to complete before you pass on.

Typically it refers to life events you wish you had completed when you were younger. It’s common for seniors and baby boomers to have a ‘bucket list’ of activities they want to finish before they die.

However, young people can also use a ‘bucket list’ of life goals to give them motivation and inspiration to achieve more in their life.

“The old man is writing out his bucket list. You should see some of the items. I don’t know how an 85-year-old man thinks he will go skydiving or run with the bulls.”

“I have a bucket list, and I’m adding more to it each day. I wish I did more with my life instead of sitting in front of the TV every night doing nothing.”

“This bucket list represents everything I wish I had done in my life as a young man. I want to complete everything before I die, and you have to help me achieve it all.”

“There’s no reason to create a bucket list; it’s not going to do anything for you. How do you expect to do anything when you’re dependent on an oxygen tank?”

“Is there any way we can finish everything on this bucket list in the next week? The doctor says I don’t have much time left.”

“Did you watch that movie ‘The Bucket List?” It was a great comedy, and I wonder how accurate it is? Do all seniors have a bucket list?”

“Let’s write you a bucket list. What do you wish you could do in life that you never got around to doing when you were young?” 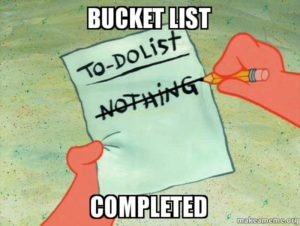 The expression ‘bucket list originates from the 1990s. The first use of the phrase appears in 1993 in a different context. The National Labor Relations Board report used the term to describe agenda items the board must postpone.

“The conferees were told that if comments or questions came up concerning bargainable issues or items that required more information, these matters should be placed in a ‘bucket list’ to indicate that they could not be considered at the conference.”

The modern use of the term comes from the 2007 Hollywood movie “The Bucket List,” starring legendary actors Jack Nicolson and Morgan Freeman. Written by British screenwriter Justin Zackham, the film discusses a list of actions the men want to complete before they die.

The term spread through popular culture, and it’s a common saying amount seniors and baby boomers describing the list of things they want to achieve before they pass on.

The phrase ‘bucket list’ has nothing to do with buckets. ‘Kicking the bucket’ means you die, so a bucket list is a collection of tasks you want to complete before you pass on. Using the phrase to describe buckets is incorrect.

You can use the expression ‘bucket list’ to describe a list of actions or tasks you want to complete before you die. The phrase can refer you your life or someone else’s. For instance, you could draft a bucket list for your life or look over someone’s else bucket list. The phrase suits social use in text conversations or verbal exchanges.

You’ll use a ‘bucket list’ to describe your final request or a list of demands you want to complete before you die. Typically, the list involved things you wish you did in life that you never got around to trying or achieving. It’s a common expression used by the older ‘boomer’ generation.