Did your manager say they need more bang for the buck from your marketing strategy? This post unpacks the meaning and origin of this expression.

The expression ‘bang for the buck’ means you get more value for your money when purchasing something. It can also refer to an outcome that’s better than expected, considering what you paid for it.

Generally, the saying refers to a good deal, where you get added value beyond your expectations. The expression can apply to physical goods and services or someone’s actions at work or home.

“I think we get more bang for the buck by going with the local vendor than the international brand. They bring more to the table for a better price. It’s a no-brainer.”

“Is there any way we can get more bang for the buck out of what we’re spending on Facebook advertising? Maybe we should look into advertising on YouTube or something.”

“Are you sure these seats are the best bang for the buck? I mean, I think we could probably get something court-side at this price.”

“This strategy offers us the best bang for the buck. There’s so much more we can get out of it at just a fraction of the price, don’t you agree?”

“Someone always tells you that you can get more bang for the buck. Do these people know your business as I do? I didn’t think so.”

“Let’s see if we can get more bang for the buck out of the time we spend it them this weekend. I’m pretty sure we can find something fun and affordable to do.”

“I want to ensure we get the best bang for the buck for the money we’re spending with them. Anything less than what the competition offers is unacceptable.” 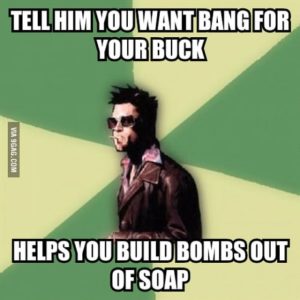 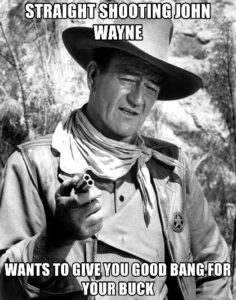 The expression ‘bang for the buck’ originates from politics. The phrase’s early use surrounded weapons and nations’ fiscal defense budgets. The first appearance of the saying in English came in 1954, in a speech by US President Dwight D. Eisenhower’s Defense Secretary, Charles Erwin Wilson. Wilson uses the phrase during a policy discussion on nuclear weapons.

The phrase continued its military use during the 1960s, during the height of the cold war with Russia. US politicians would use ‘bang for the buck’ when describing US weapons stockpiles and the savings made for the defense budget compared to the destruction they could reap on the enemy.

The phrase would shift to the more popular version, ‘more bounce to the ounce,’ in an advertising campaign by soft drink brand Pepsi in the late 1950s, spurring the use of the saying as a value proposition for consumers.

Phrases Similar to Bang for the Buck

Phrases Opposite to Bang for the Buck

Ways People May Say Bang for the Buck Incorrectly

The phrase has nothing to do with an animal. In this case, the ‘buck’ is a slang word for a dollar bill. Using the term to describe shooting animals like deer and elk is incorrect. There are memes on the internet suggesting the phrase has ties to sexual activity or prostitution, but that’s not the case.

Acceptable Ways to Phrase Bang for the Buck

You can use the expression’ bang for the buck’ when describing actions or deals that get you more value for your money. The phrase suits social and professional use. For example, you could tell your partner to shop at the wholesale market to get more bang for the buck in your monthly food budget.

You could suggest a strategy for getting more bang for the buck out of your marketing strategy to your manager. More ‘bang for the buck’ is often phrased as ‘more bang FOR your buck.’ Both iterations of the phrase have the same meaning.