Are you looking for a way to tell someone to pass on their responsibility to another competent person? If so, you could use the phrase “pass the baton” to tell them to let go. This post unpacks the meaning and origin of this expression.

When you “pass the baton” to someone, you are handing over the responsibility of something to another person. You are relieving yourself of command and trusting the other person to continue the task or project as well as you, if not better.

It’s a way of saying that you’re passing on your legacy to someone else, like your son. The meaning of the expression. The phrase may refer to the action taken of passing the baton in a relay race. Essentially, you’re passing responsibility and accountability for the project or task onto someone else.

Passing the baton can also refer to a transition of property through the generations. For instance, passing down an inheritance or company to your kids or leaving your home to a relative.

“Son, by giving you this watch, I pass the baton through the generations. This watch was my father’s, and now it’s yours.”

“The manager needs to pass the baton to Elaine and let her take the reins. He needs to learn how to delegate and abdicate authority to give himself a break.”

“It’s a big responsibility to be a good role model for your kids. When you pass the baton to the next generation, you want them to grow up with the same morals and values.”

“Pass the baton and forget about it. There’s no reason to hold onto it. It’s out of your control now.”

“We pass the baton onto Korea for the next world games. We think they will make a fine host for the next event.”

“When you pass the baton to the next person in line, you tell them that you value their contribution to the situation.”

“We have to understand that when we pass the baton to the next generation, they inherit all the bad things in our society and the good.” 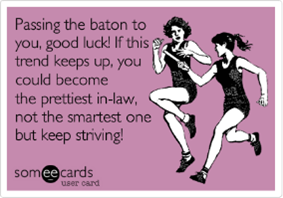 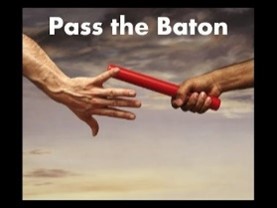 The expression “pass the baton” has disputed origins. Many language experts believe it’s a variation of the older saying, “pass the torch.”

Pass the torch originates from the Greek race of passing the torch, which we commemorate through the modern competition of the Olympics.

The phrase has been in use as “pass the torch” from at least the 1800s. It’s thought that this changed to “baton” with the sport evolving into the Olympic event of baton racing.

Some language experts believe, that passing the baton became the preferred version sometime in the early 1900s.

Phrases Similar to Pass the Baton

Phrases Opposite to Pass the Baton

The phrase has nothing to do with passing batons. In this case, the baton can represent a project, heirloom, or something of value to a person. The action of passing the baton means that the person is abdicating or delegating the responsibility they have in life to another person they trust.

You can use the phrase “pass the baton” when you’re telling someone that you want to carry on their work or legacy. It’s a way of telling the other person it’s time to let go and let you handle things. The expression suits social and professional use.

Use it at work when you’re telling a co-worker to let you collaborate with them on a project or telling the manager to let go of their responsibilities to the new assistant manager. Use it at home when you’re telling your son you’re passing the baton of your generation to him by giving him your fathers’ watch.