Are you looking for the best greeting to say to a find you haven’t seen in a while? This post unpacks the meaning and origin of the expression, “son of a gun.”

The expression “son of a gun” suits many occasions. Typically, you’re referring to another man or boy encouragingly. The saying can apply to people you know or strangers.

For instance, if you’re meeting a friend for drinks you haven’t seen in a while, you could say, “Dylan, you son of a gun,” when you meet them and shake hands.

“Reece? You son of a gun, I thought that was you. I was standing over there and thought, that guy looks just like Reece. How have you been, brother?”

“I can’t believe that son of a gun just flipped me off, even though he was the one at fault. Honey, take a photo of his license plate, and let’s shame him on social media.”

“That son of a gun must have broken in through the window while we were sleeping last night. It looks like he went for the safe and touched nothing else.”

“You son of a gun, I knew I should never have thought about trusting you with that information. I can’t believe you sold us out like this.” 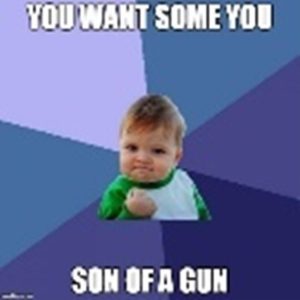 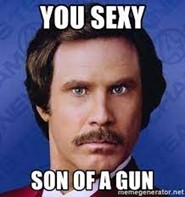 Most language experts agree that the expression “son of a gun” has disputed origins. Some believe the term comes from the meaning of “son of a military man.” In this context, the most common use of the phrase was by the British Royal Navy, where it allowed women to live aboard naval ships, a practice condemned in other parts of the world.

If the woman gave birth on board the ship, her child would earn the moniker of “son of a gun.” While the navy never officially recognized this practice, the top brass knew that sailors brought wives and prostitutes along for journeys at sea.

The phrase appears as follows in Jon Badcock’s “Slang: A Dictionary of the Turf,” published in 1823.

“The Sailor’s Word-Book: an alphabetical digest of nautical terms,” published by William Henry Smyth in 1867, defines the phrase as follows.

“An epithet conveying contempt in a slight degree, and originally applied to boys born afloat when women were permitted to accompany their husbands at sea; one admiral declared he literally was thus cradled, under the breast of a gun-carriage.”

The first example of the phrase in its modern format comes from “The British Apollo No. 43,” published in 1708, where it appears as follows.

Phrases Similar to Son of a Gun

Phrases Opposite to Son of a Gun

Ways People May Say Son of a Gun Incorrectly

The expression has nothing to do with firearms. It doesn’t refer to someone carrying a gun on them or a firearms enthusiast.

The saying is a more positive way of using the cuss phrase, “you son of a bit*h.” The term has positive and negative connotations, depending on the situation.

Acceptable Ways to Phrase Son of a Gun

You can use the expression “son of a gun” in several ways. It suits an expletive when talking about a person, situation, task, and many other ordinances.